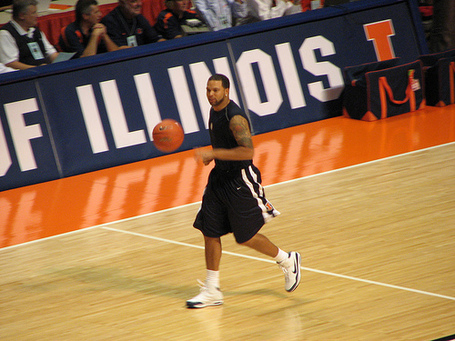 Deron returns to Illinois for the second time this pre-season. The first was for the Illinois legends game back in September.

Williams has a very loyal cult following from Illini alum. You can hear them cheering for him at the United Center. There could be no game tonight and just have Deron show up to dribble, and they would still sell out.

In the game against the Nuggets, we started to see a little bit more of the normal Jazz rotation. Deron came out at the 3:00 mark in the first. And we saw a little more of the starters. If everyone is healthy tonight, I would normally expect to start seeing minutes increase. But with another game against the Bulls tomorrow, we'll see more weird lineups and some testing. Expect a riot if Deron doesn't play a lot though.

He has been an absolute monster in the pre-season. His per 36 average would give him about 19 & 10, right where he left off last year. But it doesn't feel like he's playing at full speed either.

If CJ wants a chance at that starting job, he better start playing out of his freakin' mind tonight and through the rest of the pre-season. Because as it stands now, the only person hotter than Williams is Korver (I know that's taken a different way by female fans). I don't see how he knocks Korver out of the starting lineup, provided that the Jazz decide to stick with AK off the bench.