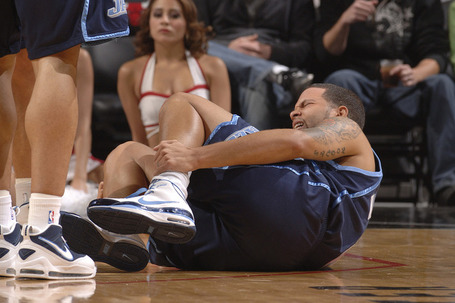 Still looking for a video of this.  But in case you didn't feel the disturbance in the Force, Deron Williams came down on Derrick Rose's foot after attempting a three.  I haven't seen this yet, but this doesn't look good.

Update from DesNews: X-Rays were negative.

UPDATE from Shums in case you don't read comments,

According to Buckley, the Jazz have “no immediate timetable” for Deron’s return, and the team should know more in “48 hours.”

It’s an inversion sprain, which Boozer characterized as “pretty bad,” and Ronnie Price said he hoped was “not as serious as it looked.”

Deron was on crutches after the game; he didn’t comment but joked that he planned to practice tomorrow. Obviously not gonna happen, but he seems upbeat.

Ronnie Price will play ahead of Brevin Knight, even after Brevin’s thumb is at full strength. Kirilenko will also be handing the ball much much more, even if CJ is playing the de-facto PG spot.