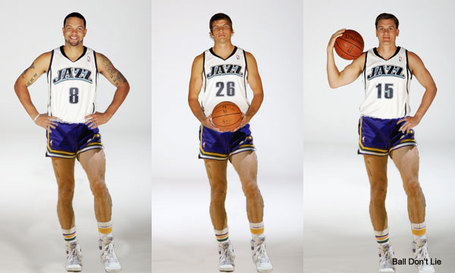 The potential killer, as it has been with Sloan, for years? This team fouls like mad. And, like, one other mainstream writer talks about it. That’s it.

If some team was coughing up 19 turnovers a game while the second-worst outfit in the NBA was turning it over 15 times a game, the TV networks would be all over it. "The _______ can’t take that next step until they learn to stop giving up the ball." And yet, the Jazz hand actual points to their opponents every damn night, and next-to nobody is talking about it.

And it’s been going on for years! Through various Sloan-led rosters, unabated. This could be a top-10 defensive team if they’d just foul like everyone else, but the Jazz can’t seem to help themselves, even as we’ve been asking them to stop for years.

I’m not going to this year. They’re just going to foul away. It’s going to get worse when Matt Harpring and Millsap come in the game, and the opponents will be in the penalty by the eight minute mark of the second quarter. It’s just something worth getting used to.

The Jazz have enough talent to overcome this issue and still pull out the first championship in the franchise’s history, but dangit, wouldn’t be easier if they just did it … the easier way?