Deron Williams has #3 cut into face

Share All sharing options for: Deron Williams has #3 cut into face 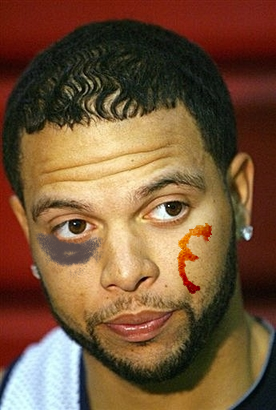 As Deron Williams was loading his car at Best Buy, a man approached Williams who was apparently enraged at the Utah Jazz bumper sticker on the point guard's SUV.

The man demanded that Williams renounce the Jazz and admit that Chris Paul is clearly superior.  When Williams declined, he claimed the man attacked him on took out a large scratching device and began to carve Williams' face with the number 3.

Police suspect that the choice of the number is related to the man's earlier demands concerning New Orlean's Hornets PG, Chris Paul.  Deron Williams was also taken with the #3 pick in the 2005 NBA draft, one spot ahead of Chris Paul.

Salt Lake City police are looking into the incident but admit that some things aren't adding up.  Primarily, the number 3 is backwards on Williams' face as to suggest that he could have done it to himself in a mirror.

The detectives also concluded that this could be a copycat attack of this earlier incident.

If you were at Best Buy and may have seen this or have any information, please click here to contact detectives.