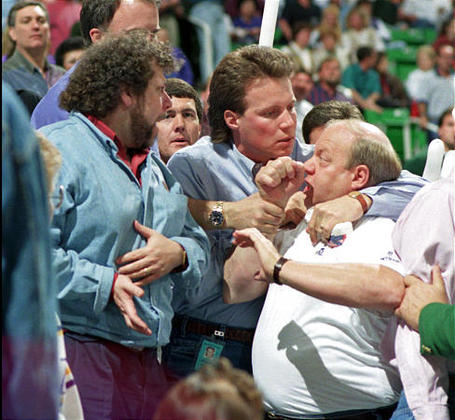 I don't think we'll see Larry attacking any Denver fans tonight like he did here in the 1994 playoffs.

So to make up for that, the Jazz will be "jacking up" the local fans instead with some combination of Colin Raye, AC/DC, bells, streamers, and spiked soda. The Jazz become the last team in the league to figure out how to get lights to come back up after turning them off. I'm sure it had to be part of Deron's contract.

Actually, it should be pretty cool. I had a few reservations, but the few sneak peaks we got from the various reporters calmed my nerves.

It's just too bad that the man who finally convinced the brass to get with the times, won't be in uniform tonight. There's no need to rush him back against a Melo-less Denver squad that may give up more points per game than the PHX teams of year's past. Why doesn't Denver just give everyone 130 points and then we can just play half-court where the Nuggets just have the ball on offense all the time? Then they play the whole game trying to score more than 130. Turnovers, defensive boards, and offensive fouls would take 20 seconds off the clock. They're happy because they can just jack up shots all night.

Williams will be back soon enough and I don't think we get affected by it too much.

Tonight we'll get to see how AK really does coming off the bench and playing with the second team.

Can KK keep up his torrid pre-season stats?

Will Brewer make the leap? If he does, that might be more valuable than a defensive center. If he can hit the outside shot, the inside will be wide open.

I wrote this for the recap after the game 6 loss to the Lakers last year,

So now the big question is, "Now what?" Like the previous 30+ years of Jazz existence, it's retooling and rebuilding for next year which seems like an eternity away. If there's anything that's a bigger pet peave for me, it's getting so far into a project, a book, etc. and then having to start over. The Jazz just played 82 games, plus the playoffs, and what is there to show for it? Does a NW Division title really give anyone satisfaction? It was a great year, but unless you win it all, you go home disappointed.

There's no question that the Jazz's regular season record will probably determine if they reach the finals. Get the #1 or #2 seed in the West, and the Jazz have as good as shot as any to go deep by virtue of having home-court. End up with the 4 or 5 seed, and it could easily be a second-round exit.

The season is finally back. Get ready for another 82-game rollercoaster.

What's the Jazz margin of victory?