That would have been a tough loss to absorb. Yes, it's only the first game of the season. But from my understanding of how the system works, a first-game win counts as much as a late-season win.

Even with Carmelo detoxing and Deron still a bit wobbly, this game shouldn't have been as close as it was. The Jazz did start to pull away in the third and built up a double-digit lead. But this is probably where we missed Deron the most. Had he been playing, I don't think there's any way that the Nuggets come back to tie it in the fourth. The Nuggets made some big shots down the stretch granted, but they came as a result of the Jazz forcing passes and taking ill-advised shots. With Deron running the show, we would have gotten much better looks and he would have taken a lot of the pressure off of others to make plays.

That's no knock on Ronnie P. That's not his usual role. He's great as a backup to come in and change things up a little and to provide a spark. He didn't have a good shooting night at all, going 1-9. He did provide some great hustle and energy going after loose balls, including one that led to a nice behind the back flip to AK at mid-court which resulted in this flush, 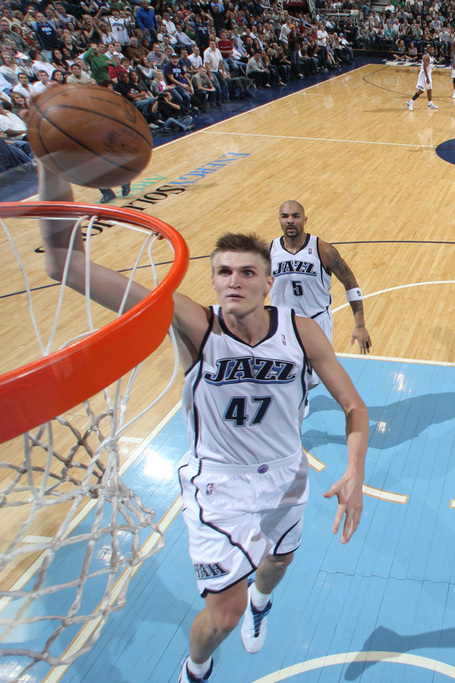 and he ran the offense well for the most part. As was stated in the game thread by UtesFan, he looked like he was trying too hard offensively. He should settle down for the next game provided Deron isn't back.

Bringing AK off the bench could be one of those small things that nudge the Jazz over the top. He is the king of the second unit and he loves it. I don't know why all of the reporters were asking him questions as if it were a demotion. I haven't heard Kirilenko grumble about it at all. In fact, I think he kind of sees it as a rebirth. It's kind of had the effect of a trade without him getting traded. I don't doubt that had he been tradaed to a team where he was one of the central figures, he would have flourished again. That's what this move has done. And it's brilliant. Even if CJ doesn't pan out starting, I think we still see Korver get moved into the starting spot with AK still as the 6th man. AK's line was great last night,

David Locke on KFAN mentioned yesterday that he doesn't think a team can improve defensively with the same players. He doesn't have the stats to back that up yet. But if it is the case, then perhaps moving AK to the bench might have the same effect of bringing in another player.

Boozer showed why he's going to get paid next summer. He was fantastic going for 25 & 14 to start the season. I was also impressed with his D. He had a couple of great blocks including one on Nene that pretty much sealed the game for the Jazz. He had a nice strip of Kenyon Martin that was called a foul by the backside ref when he had no view of the play at all. He couldn't see if Boozer got the ball or not. One way to know if it's a foul or not; if the ball goes down when there's a strip, it's usually a clean play. If the ball goes up, that means he got his arm. And if you can't see the play anyway, swallow the whistle. Booze also leveled Iverson on a nice pick. Is there a corresponding term in basketball for de-cleater? Because that's what it was. I like this little toughness streak. I hope we see it all season. He also talked about after the game about how they would have liked to have held the Nuggets to less than 94. I thought it was impressive, but I'm glad to see that focus.

And the unheralded Memo had a solid game. He shot only 5-12 and took only one three. I don't know how to explain it, but I can tell when his shot is going in by his stroke. It's a more compact stroke and the ball usually has less arc to it. When he lengthens his shot motion, he usually gets the old Griffith Rainbow shot and it's not as likely to fall. Here's my photo-illustration, 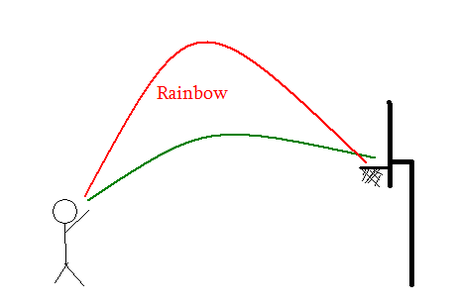 Brewer had a great game in limited minutes. He went 5-9 for 15 points. His jumper was pretty good. He didn't get his points all from dunks and layups. Sloan seems to like AK and Korver to close out games (although Ronnie B was in for the last bit). So that means less minutes for Brewer right now. 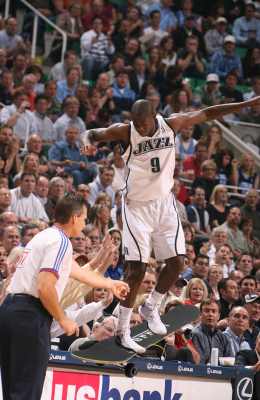 The stats were pretty close down the line. The Jazz won this one though because they hit their free-throws. That hasn't always been the case. But they needed every one. Korver missed one at the end of the game but was able to redeem himself when the Birdman stepped into the lane early. He wasn't going to miss his second chance. Korver didn't seem to experience the Sampson effect from his haircut. He went 3-6 including 1-2 from deep. If he's shooting 50% from the field this year, we're in good shape.

I still felt like this was a pre-season game. The crowd wasn't into it for most of the game. And with Deron and Memo out, AK coming off the bench, and Matt missing, it didn't have the same feel. But when we almost gave the game away, that brought back the regular season flavor.

Up next, the Clippers of LA. I hope to have Deron back for this because he gives us someone to match up against Baron Davis. It will also mark the return of Jason Hart. And given past experiences, I expect some boos when he comes in.