Well, here it is, the moment you've all been waiting for. The first official game thread of the 2008-09 season for SLCDunk.com. The season doesn't start without it.

For those that are new to SLCDunk, game threads can't be beat. Comments are refreshed automatically. You see the comment as it's posted. It's a great way to see the response from Jazz fans to a Deron Williams dunk over Kobe or the pain felt as Harpring misses a layup.

I figured I'd open this one early seeing as it's the first game of the year and everyone would probably be a bit anxious to get commenting.

Up first of course are the Lakers of LA. Yes, the NBA schedulers were crafty when they set up a rematch of the second round WC playoffs. But other than satisfying your Jazz Jones, don't expect this this game to be a pre-cursor of the regular season. The starters won't be playing regular minutes and despite the Jazz players hanging out and playing for about a month, there will sure to be some rust.

That doesn't mean you can't be any less excited about the Jazz pounding the Lakers. That's never a bad thing.

But if everything plays out this season, this could be one of many meetings between the Jazz and Lakers, culminating with a matchup in the Western Conference Finals. Both teams are picked to finish the top of their divisions.

We'll see the return of Andrew Bynum. Could he have put the Lakers over the top last year? There's no doubt that they were outmanned on the inside against the Celtics. He could have been the difference for them. Memo could neutralize him a bit on offense by making Bynum guard him out on the three-point line. But it's likely the Lakers might throw someone else on Okur to keep Bynum inside on D.

We'll see if Boozer can shake his poor showing against the Lakers in the playoffs from last year. I just need a sign that he can be the Boozer we all need him to be against the Lakers. Having Odom, Gasol, and Bynum all being able to guard him, I need just a bit of reassurance that he'll be able to get it done. I'm not looking for a huge game of course, just that when the real games come, he's not going to get shut down again [UPDATE: Boozer is out].

Fisher seemed to have Williams' number at times last year. Look for those crafty veteran moves by Fisher to be thwarted by Williams. He's not going to have the sympathy this year for Derek that he's had in the past. Fisher will just become another bit of roadkill for the D-Train.

Wouldn't it be crazy if Kirilenko is the starting PF for the Jazz this time next year? After all of the crying, feuding, and potential salary cap killing contract, we could see AK quietly put together a great year. Then Boozer bolts and the Jazz are stuck without a starting PF? You'll say we have Millsap that could start there, but he's going to want a large contract. Are you going to give him a long term deal and commit to having him as your starter for the next 3-5 years? Wouldn't that be a almost exactly like what happened to AK when he got his deal? Instead, if Boozer leaves, AK could slide to the PF, Millsap could get more minutes at SF and backup AK, and the Jazz could draft a PF with the 2010 pick from the Knicks. AK is looking like some good insurance.

And finally we have Kobe v. the beefed up Brewer. The muscle will allow Ronnie to bang more with the 2s and 3s of the league. What's yet to be seen is if the added bulk affects his athleticism. I'm not suggesting anything at all here, but how does someone add on 20 lbs in just the offseason, and there's no talk about PEDs? But if a baseball player gains a little muscle, he must be on something (at least that was the talk before). Early returns are showing that Brewer's jump shot is better this year. If he can get a more consistent jump shot, yikes. He'll be scary. Nobody talks about it much, but I felt that Boozer's poor post-season was because of Ronnie. Kobe begged Ronnie to take an outside shot. Because Ronnie couldn't hit anything, Kobe could drape himself all over Boozer in the post and deny the entry pass. I'll give up the flashy dunks from Brewer for a few more jumpers.

And because it's the first pre-season game, we'll likely see some Kosta, Fess, and Almond. Fess is going to have to have a tremendous pre-season if he doesn't want to be in Orem all year. Koufos seems like he's already a Sloan favorite. And as we all know, once you're in the "Hard Worker" fraternity of Sloan U, you're almost guaranteed PT regardless of skill. And right now it looks like Fess is the Lamda, Lamda, Lamda to Sloan's Alpha Beta.

And finally part II, I'm happy to announce Dial the Dunk. Dial the Dunk is a new phone number for SLCDunk fans to call and leave their comments, frustrations, tips etc. So if you're stuck in traffic listening to the game and you can't be part of the game thread, call (801) 618-3336 and leave a message. I've got a pretty lame greeting up right now, so if anyone wants to create something better, let me know. I'll post the best of the Dial the Dunk messages throughout the game and others. So make sure to put the number on your speed dial. 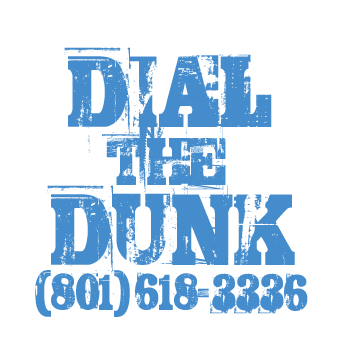 The road to the title begins tonight.

Other Jazz blogs (updated as they become available)

How do the Jazz finish the season?