The anatomy of a travel and some other thoughts

Share All sharing options for: The anatomy of a travel and some other thoughts

This really isn't meant to pick on LeBron.  I'm not bitter that the Jazz lost.  I thought the Jazz played well for the most part and finally ran out of gas at the end of this five-game road trip.  LeBron knocked the wind out of them at the end.  The Jazz just couldn't match the fire power the Cavs did.

But I'll never for the life of me understand why three steps is allowed in the NBA.  Everyone gets the no-call, especially stars.  The details of the traveling rule are as follows,

So when you pick up your dribble, you get a two-count rhythm to either come to a stop, pass, or shoot.  The second count comes when,

(1) After the count of one when either foot touches the floor, or both feet touch the floor simultaneously.

I know everyone knows that three steps should be a travel as it is more than a two-count.  The other part of the tracveling rules go over how to determine a pivot foot should the player come to a stop or receive the ball while stopped.

If a player picks up his pivot foot before dribbling, it's a travel.  That is probably called 99% of the time.  Tell me how that gives a player an advantage any more than this does (from the Utah/Cleveland game),

First step after picking up the ball 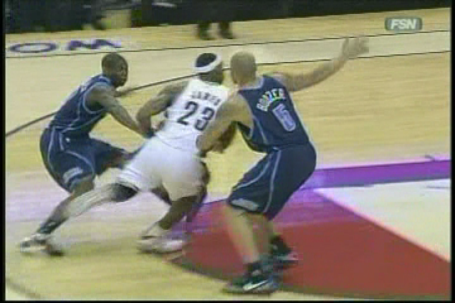 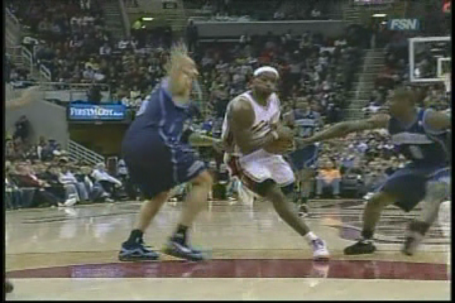 Second step after picking up the ball.  This is where he should be shooting/passing/stopping at. 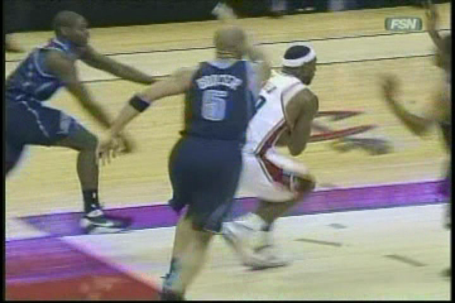 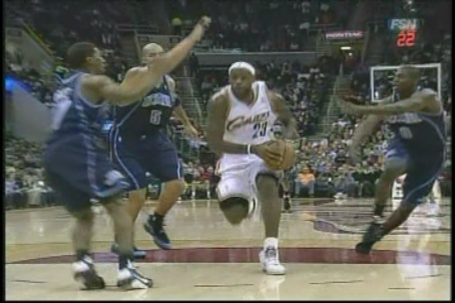 Now, being LeBron, he could have taken off from here and dunked.  But because he was going off the wrong foot, he needed to take one more step, 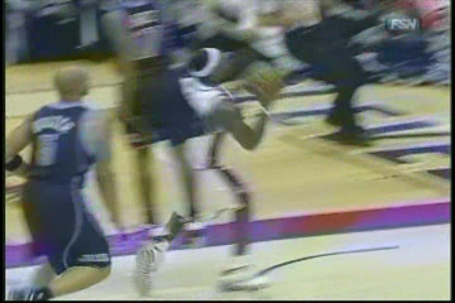 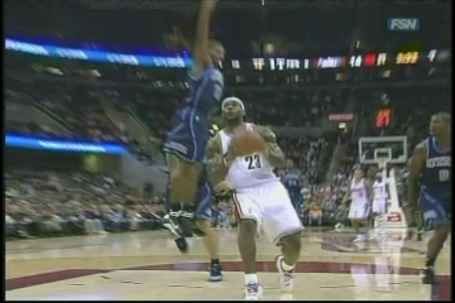 That one extra step led to an easy left-handed dunk, one he wouldn't have had without traveling.

There's no way you could convince me that a Giricek studder-step travel gives someone an advantage over taking a third step.  LeBron was able to go from the top of the key to the basket without having to dribble.

And there's no way that the refs miss these.  They see them and let them go.  There's a myriad of reasons that you could come up with as to why they swallow their whistles.  To me, it cheapens the move when that extra step is required.  I've also seen Deron get away with it.  It looks great, but at the same time I think that the player had to bend the rules to get it.

I know it's not ever going to change.  But it drives me nuts.  The refs are being subjective with the rules and that always opens things up for scrutiny.  The move above wasn't the cause for the Jazz loss.  There's a lot of stuff the refs have to let go, otherwise we wouldn't have a possession without a whistle, which would suck.  But for things that are so black and white, how can it not be called?

For Jazz fans, click through for a couple of other notes