Share All sharing options for: Recap - Phoenix Suns @ Utah Jazz - W 109-97 - If we could somehow harness this energy

Can someone tell me what's going on here?  Honestly.  Everyone has home-court advantage.  Everyone's suppose to win at home. But the Jazz are a riDUNKulous 32-1 at home during the regular season since the Kyle Korver trade.

Is EnergySolutions secretly storing waste under the ESA?  Is this the source of their power?  Are their home jerseys lined with a super chemical?  Think when they beat Boston @ Boston last year.  The Jazz wore their home whites because the Celtics went green for St. Patty's.  Is it because they're gettin' some at home?  Do they have phobias of using unfamiliar toilets so they just hold it all the time?  The ESA is their yellow sun and anywhere outside of Salt Lake is their kryptonite.  Whatever it is, we need to bottle it, and take it with the on the road. 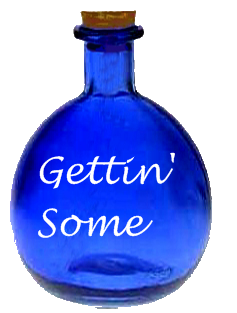 The Suns were coming off of big wins and built a first-quarter lead of nine.  But when the Jazz went to the zone defense, they staged a comeback and led by three at the break.  They traded baskets in the third quarter and entered the fourth up 83-77.  That's when it turned into a highlight film of fast breaks, three-pointers, dunks, and two huge blocks by AK on Shaq that shook the roof (those two came after Millsap had rejected the Big Cactus).

The Jazz, showing more energy than the previous five games combined, took advantage of the Suns' foul trouble.  Nash had 5 and maybe those of those were legit (but who's complaining?).  Shaq had 4 and couldn't go at Boozer without drawing another.  The Jazz turned those 28 fouls overall into a 36-27 free throw advantage, something that doesn't happen very often.  See what happens when you get to the line more boys?

Boozer got off to a horrid start.  And his first two free throws of the game looked like he was trying to learn some intricate video game method for shooting free throws.  They both clanged off the rim.  This led to "worst game of the year" comments in the game thread.  And at that point, it was.  But fortunately he turned it around and finished strong ending with 21 & 15.

C.J. Miles carried the Jazz in the first quarter matching Amare Stoudemire's 15 points.  He was out of his mind, nailing everything that he threw up.  It earned him a little more PT.  He had 21 points in 25 minutes.  Of course he could be getting more minutes if Harp would retire, but that will have to do for now.  Brewer is barely getting his 30 minutes a game as a starter.  I don't expect CJ to start getting more.  It's great to see him coming along.  Hopefully he'll make that 3.7 MM per start looking like a bargain.

As opposed to the $6MM that Harp is stealing right now.  Matt has a lot of heart and he plays hard.  You can't accuse him of taking plays off.  But even with all of that, he's just barely getting by.  Sure, he can still knock down a J from one of his contractual spots on the floor, but he's a huge liability on defense.  If you look at his +/-, it looks great.  But that's a small sample size and the Jazz have to go to a zone when he's on the floor to compensate.  The zone worked well last night, but even Sloan has admitted that you only go to a zone when you have someone that can't play D.   Harp, a great guy, but he is physically past being even semi-effective.

Come next spring when everyone's analyzing what trades helped teams the most, they're going to forget about the Hart/Knight swap.  Knight has been above solid all year while Price has struggled, especially with his shot.  Price will be a fine backup (if Knight doesn't overtake him), but Knight right now is better at running the first unit.  His shooting has been icing on the cake.  He was 6/7 last night with 6 assists.

Millsap and AK were quite the force on the inside last night.  Both took it to the hoop strong.  And they combined for a DDOS attack on Shaq.  Millsap denied Shaq on a would-be dunk.  Then AK followed up the humiliation with back-to-back swats; the second more emphatic than the first.  Those swats set the tone for the rest of the fourth quarter.  The Suns were never able to get momentum back on their side and never threatened after that.  Kirilenko finished with 19 points, 7 boards, 3 assists, and those two blocks.  Millsap had 11 & 9 to go along with the Shaq rejection. 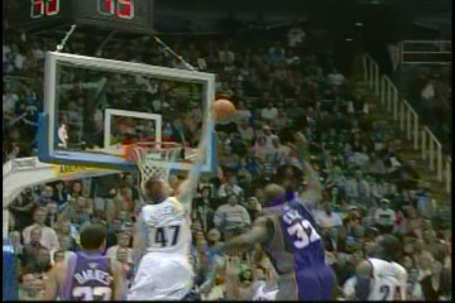 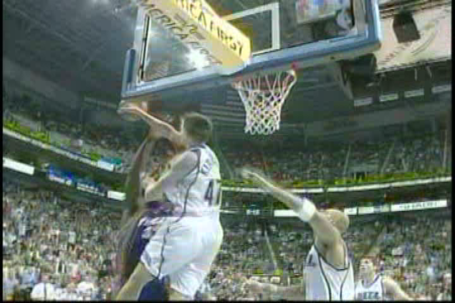 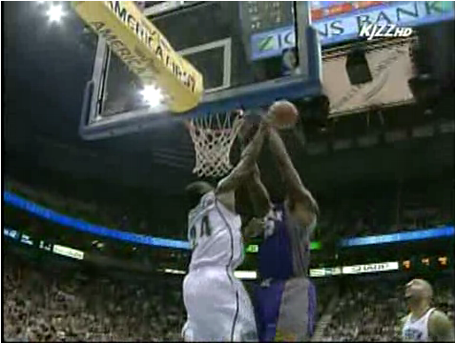 And Shaq had to stand on Nash just to get this one to go down, 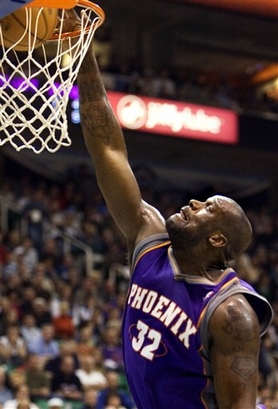 He had absolutely nothing tonight.  He finished with just one board and couldn't jump at all. Andrew Bogut and the Bucks will come into the ESA on Wednesday to be shot and tagged.  Deer season may over in Utah, but I don't think the Fish and Game will mind a little poaching.