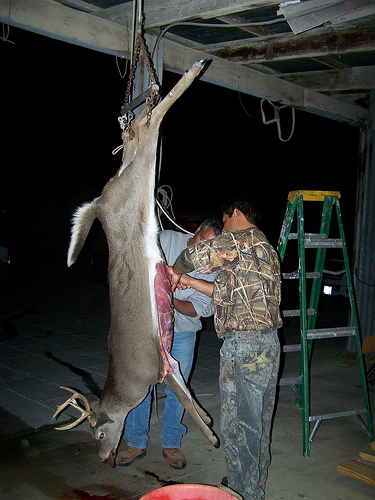 This game was a crap sandwich with some really delicious pumpkin chocolate chip bread on both ends.  You suffer through it and don't remember the bad part because the end was so good.

The Jazz started the game looking like they were going to run the Bucks out of the building, and really, they should have.  Milwaukee's best were coming off a loss at Denver the night before.  They built a 16-point lead at one point.  But thanks in no small part to Andrew Bogut's crazy 16 & 20, the Bucks were able to get back in it and take a two-point lead into the half.

The crap sandwich continued into the third quarter as the Jazz didn't have enough offense or defense to put Milwaukee away.  Bogut, despite having Boozer, Millsap, Kirilenko, and Okur to contend with, owned the defensive boards, preventing the Jazz from getting any of the easy offensive putbacks that they normally do.

So after falling behind by 10 at one point, Kirilenko and Millsap turned the game around.  The block part at the ESA was a sight to be seen.  How frustrating does it have to be that you beat AK off the dribble, have a clear shot at a layup, only to have Andrei's tentacles swat the ball away or pin it to the backboard?  Maybe that's why Jefferson swung at AK when they were coming across the lane and dropped him.  He hit in the the right side and they later stated that he just had the wind knocked out of him.  Of course everyone gasped when that happened.  Kirilenko has been the only thing holding this team together so far.  Thankfully he shook it off.  AK finished with 16 points, 7 boards, 3 dimes, 5 steals, and 4 blocks (althought it felt like 10).

Millsap was hampered for playing time because of foul trouble, but still swatted 5 shots including a rejection of Bogut that was identical to the Shaq block.

Boozer was solid once again with 20 & 11.  He played some pretty good D on Bogut most of the night.  He had one play that had me seeing flashbacks of Malone.  Bogut had his back to the basket with Booze on him.  As he turned around with the ball, Carlos slapped it out of his hands and the Jazz picked up the loose ball.  And in another scary moment, Boozer came down awkwardly and his left leg looked like a BowFlex as it bent outward.  They're calling it a tendon strain and should miss any more time.

Speaking of crap sandwiches, had anyone seen Unbreakable?  The Jazz are the Elijah Price's of the NBA right now.  So who's David Dunn?  Who doesn't get hurt?  Maybe it's the Jazz of old with Stockton and Malone.  They rarely missed games because of injury.  But it seems like everyone is going down this season with ankle injuries.

CJ Miles continued his upward trend.  He was feeling it again, going 8/16 ro 25 points and 29 minutes.  Who's minutes went down because of that?  Matt Harpring.  He only played 9.  I like this trend.  CJ nailed a three towards the end of the game to effectively put it out of reach.  And he finished 7/8 from the line after shooting 64% this season so far from the stripe.

Price seemed like he missed everything.  But he actually shot well, going 7 of 13 from the floor and handed out 6 assists.  He had a dunk in the fourth when he was all alone out front.  There was only about 13 seconds left, so he probably should have just dribbled it out.  But it looked like he already had it in his mind to dunk before he realized how much time there was left.  Sloan said something to the effect after the game that he told Price to push it and to run against the Bucks.  And if he didn't he was going to take him out.  That turned out well.

Okur returned but clearly wasn't himself.  He still looked physically affected from his flight and I'm sure his father's situation is weighs on him.

Up next, the place we haven't won since the Clinton administration.  Even if we had everyone healthy and they had Manu & Parker still out, I would still be worried about this game.  The Spurs just can not get going offensively this year.  That means to look for a 110 point outburst including 30+ from some unknown foreign rookie they drafted three years ago and are just bringing on now.

Jerry gets the game ball from his 1,000 win with the Jazz