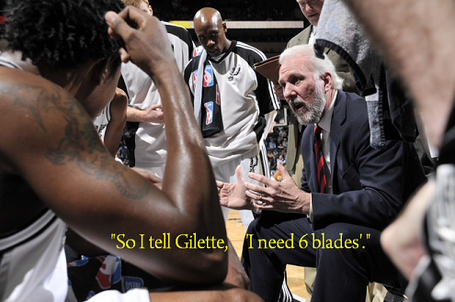 Well, that was competitive for about 10 minutes.

The Jazz started out strong, leading 20-11 at one point in the first quarter.

The the Spurs decided that they were going to turn around a season-long offensive slump. After struggling to break 90 points for most games, they exploded for 119 points with 45 of those points coming from behind the three-point line.

From the end of the first quarter to the end of the third, the Spurs could not miss. Roger Mason, George Hill, and Michael Freakin' Finley lit up the Jazz from the outside for 66 points. Mason had 7 of the 15 three point field goals.

In that same time frame, the Jazz weren't shooting poorly. They were near the 53% mark. But SA shot 60% through the third quarter and effectively ended the game when they outscored the Jazz by 16 to push their lead to 24.

The Jazz matched the Spurs in free throws (20), steals (8), and rebounds (36). But a few more turnovers by the Jazz and a few more offensive rebounds by the Spurs gave them more shot attempts. And of course the 13 more three-pointers made didn't help any.

Ugh. This is worse than a loss. I just hate hearing about the Jazz not winning in SA. And I don't want anything to do with this team in the playoffs. And yes, they will make the playoffs. They'll need to be taken out by PHX. That's a long ways off though.

And most of all, I hate how Duncan can camp in the lane, go over the back, travel, and not get called for it. The one travel call he did get was when he shuffled his feet in the lane after he had been there for a 10 count. But when he drove across the lane and needed another step to pass the ball instead of shoot, that was no problem.

Of course, that's not what lost the game for the Jazz. It's just frustrating to watch. The Spurs shot well and deserved to win this one. But they have to stop getting breaks at home at least for one game eventually, right?

One thing I noticed that Popovich does is call a timeout when the Jazz started to get any kind of momentum going. Even when the Jazz had scored 6 straight to close the gap to 10 at one point, the bearded one called a timeout. He didn't let the Jazz get going at call. That seems to be the way to beat the Jazz. Doing anything to throw off their rhythm causes problems. And it's not just for momentum. If they're forced to take shots outside the offense, or make an extra dribble, or something along those lines, they seem to struggle. On the other side of the court, they don't seem to doing anything at times to disrupt the flow of the opponent's offense. They'll D up but still let them catch and shoot in rhythm.

We did have a few standouts...

Kosta continues to impress with 8 points on 4/7 shooting to go along with 7 boards.

C.J. Miles had another strong game with 16 points and 10 rebounds (that will make Sloan a little happy).

AK had an off game. He didn't shoot well and had an airball on a three-point attempt.

Brewer shot the ball well, 7/13. It was good to see him getting a couple of layups/dunks in the offense. I'm glad to see his jump shot falling a little more, but he lives on the baseline.

The Jazz head up to Memphis for tomorrow night's game. This is another game that we should win despite not having Williams, Boozer, and whoever else gets held out. But because we're on the road, all bets are off.

And if you need something to do while waiting for the next opportunity to beat the Spurs in SA, you can walk this route of some NBA cities three times.