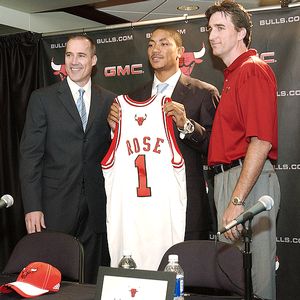 I'll be very disappointed if Derrick Rose is booed any less that Derek Fisher was when he returned to the ESA.

The Jazz have been very fortunate though while Deron has been out. They've had a relatively easy schedule that has enabled them to go 9-5 on the season. Would it have been better with an healthy D-Will and team? Probably. I'd put as at about 11-3 or 12-2 right now.

But as it stands, we're second in the Western Conference. We're about to get Deron back. And most of the other walking injured should be back then to start a run.

But first things first, taking care of the Bulls. I remember in the 90's when Jazz home games against Chicago had a huge following of Bulls fans. There's still some, but not nearly what there used to be. Bandwagoners are like that.

The usual suspects are out again, Williams, Boozer, Korver, and Collins. Regardless, we should be able to contain them at home. And if Memo keeps up his hot shooting, it's lights out.