The sheriff is back 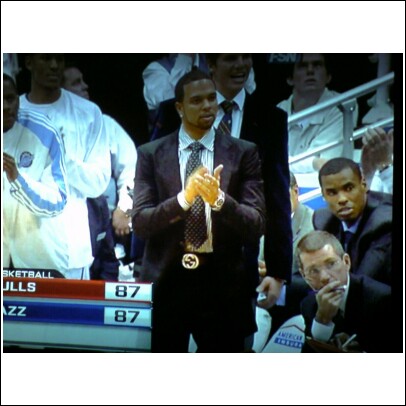 Here's my season's first pre-cap (recap and preview all in one). Due to the American holiday I've been out quite a bit and hosting quite a bit. So I've slacked a bit.

Anyway, the Jazz got a head start on Thanksgiving by carving up the Grizzlies at home on Wednesday.

The two biggest things to take from that game were number 1, the return of D-Will. While his 15 assists and sweet alley-oops got the accalades for the night, it was Deron's calming presence that was perhaps the most valuable to the team.

While the lead hovered around 12 or so for most of the game, you never felt that the Grizzlies were going to make a run with Deron on the floor. And when they did make a mini-run, Deron was quickly re-inserted and the run was squashed. Despite not being able to drive to the hoop with his normal confidence, his jump shot is falling. But I can't wait for the first time he throws down (preferably over Yao or the like).

The second thing to take from the Memphis game, and really from the entire season so far, is that our bench is going to be hard to match. We use to have to worry about squandering a lead or losing ground when the first team came out. But with the re-emergence of Kirilenko, the beastly performances that Millsap gives us, Price & Knight's left and right jabs, plus others, you have to feel pretty good about the team when the second unit on the floor.

So the team slowly, but surely, is getting back to full strength. This stretch of relatively easy games couldn't have come at a better time. The offense seems to be clicking again with a lot of layups and dunks. And when the defense is creating turnovers like it had been, the Jazz are in business.

Up tonight are the Kings from Sac Town. They haven't had a win since beating NOLA (thank you). They've had a couple of close ones but haven't been able to pull any out. So while the Jazz should beat them handily as well, they're not to be overlooked. But if the Jazz play with half the energy and hustle they had against the Grizz, this should be another W (provided Salmons doesn't go off again).