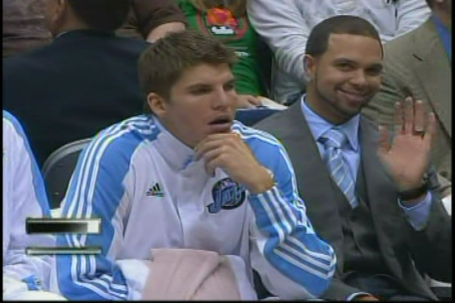 Another game, another comeback.

Man, these are great if you win.  But I don't know why the Jazz keep putting the fans through this.

Despite shooting 53% in the first half, the Jazz found themselves down 7 at the break.  Portland rained threes down from all over the court.  And when their other shots didn't fall, they were getting seemingly every offensive board for anther shot.

Once again, the Jazz methodically plugged away in the third, led by Mehmet Okur and Carlos Boozer.  And in the fourth, every time the Jazz would start to put the game away, Portland would answer back with another three or a Brandon Roy drive to the hoop.  The drama finally ended when pretty boy Rudy Fernandez clanked a potential game-tying three from the corner.  The Jazz corralled the rebound and all that was left were the free throws.

Speaking of free throws, you would look at the finally tally and see Portland had a slight edge, 27-22.  But the Jazz had only 5 FT attempts through the third quarter.  The Jazz were getting pounded on the inside and could not get a call.  Boozer's layup at the end of the game that pushed the Jazz lead to 3 was a flip on the glass with his left hand as he was being pushed under the basket on the right side.  I don't think it was a shot that any other PF in the league could have made given Boozer's ambedextric moves around the hoop. 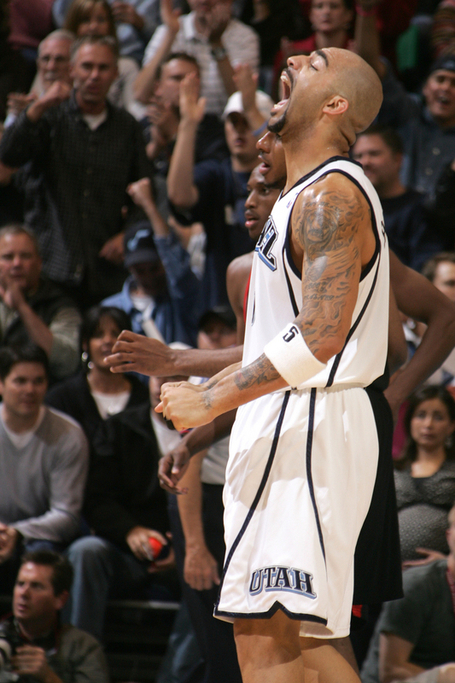 But when the Jazz started going to the free throw line, they made them count.  Only AK missed at the line all night, and he was still 7-8.  The Jazz are now shooting nearly 78% as a team from the stripe so far.  Without that, the Jazz are probably 2-2 right now.

Ronnie Brewere continues his early-season dominance shooting 6/12 for 16 & 6.  The two plays that stood out for RonnieB was his baseline reverse jam and posting up Blake for a layup and a three-point play.  I love seeing him post up.  We'll see how he does against the likes of Kobe and other defensive two-guards.  But that extra muslcle he's put on has been the biggest reason for his improvement this year. 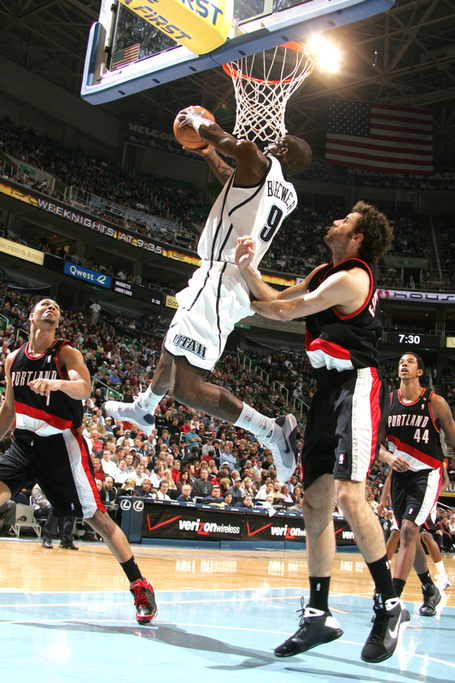 And what a treat it's been to have Brevin Knight in the fold.  Suddenly the guy can shoot in addition to handling the ball.  While RonnieP has struggles to find the bottom of the net (24%), Knight has been a valuable insurance policy with Deron out.  I think RonnieP will right the ship once Deron returns and he goes back to his normal role, but don't think for a second that Sloan would hesitate putting Knight in over Price.

I don't know what more can be said about AK's play so far this year.  He's arguably on his way to having the best season of his career.  Check out his per 36.  His blocks are down, but his stats are nearly the same as his heyday.  I don't know what his win share is or anything like that, but his role now has had to have accounted for at couple of the wins so far.

The ESA has always been a tough place to play.  And I'm sure there are a lot of factors including the fans, the altitude, etc.  I'm not sure what to make of the Jazz second-half comebacks.  Are the opponents really that tired or winded from being in the higher altitude?  I would like to think that the Jazz have finally turned a corner and have finally figured out how to close out opponents.  They did the same on the road against the Clippers.  We'll find out a lot more once the Jazz hit their eastern road swing next week.

Speaking of the high altitude, aren't there simulators for this?  Couldn't all teams practice in them all the time?  Then it wouldn't matter where they played at.

I would love to see a commercial or marketing campaign from the Jazz that shows an opponent fearing coming to play in the SLC.  Something to do with the crowd noise, suddenly not being able to breathe, and entering a Mad Max type arena when he walked onto the floor.  That's better than the life off, game on commercials, right?