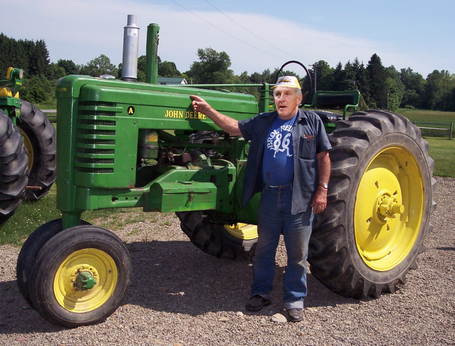 How many miles has Jerry walked while pacing the sidelines? We should have had a pedometer on him this whole time. I'd like to see what his WPM (win per mile) is.

Whatever it is, the 1,000 wins with one team is something we'll likely never see again. And Sloan has a real chance to push that to 1100+ depending on how much longer he coaches. On that note, can we (and by we I mean not us, but the MSM) stop speculating when he's going to retire? When he makes the decision, there probably won't be a press conference. You'll just get a fax on John Deere letterhead. No one knows and we're tired of hearing about it.

Anyway, the win should come tonight against the OKC ball team. Speaking of them, couldn't we just combine them with the Bobcats so that they can field a good team? And of course the new name would then be the Thundercats. Much more awesome.

And when Sloan gets his 1,000 win tonight, look for the "get off my lawn" look when people try to congratulate him.

That's the highlight of the night. The bad news now is that Deron is likely out 4-6 weeks with his ankle.

"They just said two weeks because they knew I didn't want to hear four to six weeks, probably," Williams said at Friday's pregame shootaround. "Dr. [Lyle] Mason knows me. Now I wish they would have, so I wouldn't have got my hopes up."

We'll be lucky to see him back at home. No rush. Even with a couple of losses, we're right on schedule.

Although, it would have been nice to see if the Jazz could have started 10-0 or 9-1. With Deron, they would have had a good chance. They could still end up with a similar record, but the east-coast swing always seems to kill us.

Here's another interesting bit to start the season. Take a look at the following schedules,

See any similarities? Those are the first four games for the Jazz and Lakers. Utah's upcoming games are easier than LA's, but with the exception of the Portland game, the margins of victory have been similar. And this has all been without Deron Williams.

I don't think we're quite at LA's level yet, but if this early season play is any indication, we'll be in a dog fight for the number 1 seed throughout the year. We just can't drop any games against those teams we're suppose to win, like tonight.

How many victories with the Jazz will Sloan end his career with?