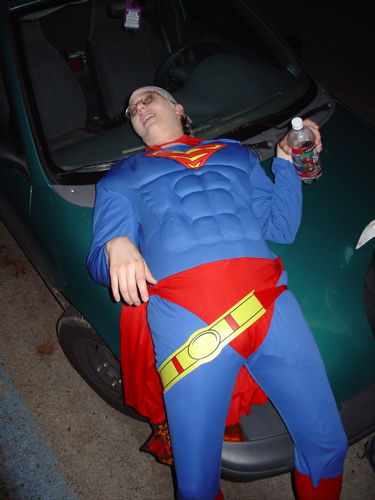 "I guess I came down the wrong way or something. I don't even remember what happened but I was trying to run back on defense and my knee started hurting" - Dwight Howard

The Man of Steel might be sidelined for tonight's game after he banged his knee against some kryptonite. Howard has never missed a game since he's come into the league. It doesn't sound serious at all, so he could tough it out and play.

I wouldn't cry if he decided to sit this one out though. He's an absolute monster and should be avoided at all costs. If he's not swatting balls into the upper deck, he's throwing down over anyone in the paint.

We'll have our 150th different starting lineup of the season. With Brewer out to attend his aunt's funeral, Morris Almond will make his first start of his career. It's great to see him get rewarded for putting his head down and playing hard (and well most times) despite apparently not having a future with the Jazz. I kind of predicted this would happen. The Jazz basically tell him he's not part of their future, but then because of injuries and other things, they end up needing him. To a much greater extent, it's what's happening with Starbury. The Knicks put him on the bench all season, and then make a trade that leaves them short of the minimum players needed for a game, and then have to beg Marbury to suit up. They're for totally different situations though.

The Magic are a great road team. They had a better record on the road last year than they did at home. But they're on the fourth game of a five-game western road trip. They lost last night in PHX. So the Jazz should have some fresh legs to get out to a quick start. Let's hope they get a big lead at the half and do a better job at putting them away in the second half then they did against Portland.