What?  Like you expected anything else?  Is anything in this season surprising anymore?

Okay, so this was a little surprising.  If you were witness to the first quarter ball of flames, you saw probably the worst quarter in Jazz history.  Check out the shot chart, 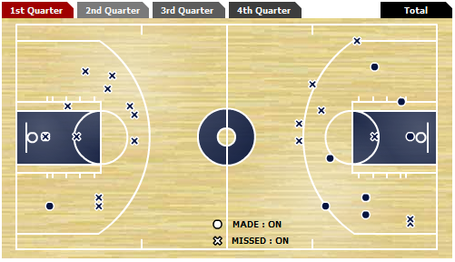 That resulted in 7 points.  Even if you're just shooting threes the whole time (which there wasn't even on attempt), you score more than 7, right?  It's like the when you're 33-0 on the season in NBA live and then the CPU decides that you're not going to be able to hit any shots ever again.

Maybe it was that end of the court because New Jersey came out in the second quarter and scored just 12 points.  The Jazz's second unit managed to turn things around.  They doubled-up on the Nets in that quarter, scoring 24.  The Jazz went from being down 22 (27-5) to being down only 8 at the half.

Let's look at a couple of the stats at that point.  Deron had 1 point on 0-1 shooting. Memo was 0-7.  Deron had 0 assists.  He had an Ostertag.  He didn't get his first one until about 2 minutes into the third.

Korver found out how to shoot again.  He had two big buckets in the fourth when he nailed down a free throw line jumper after Carter had fallen down.  Then Williams found him on the next possession for a wide open three.  KK ended up with 18 & 9.

The one consistent force in all of this was Millsap, again.  He went out and put up another 18 & 12.  He's doing this against good teams too.  He had his monster game against Boston.  He was huge in the Orlando and Portland games.  This runs his double-double streak to 13 games.  Every game his asking price goes up.  Even if he's behind Boozer for the rest of this year, other teams have taken notice during this stretch.

So how did the Jazz overcome the 22-point deficit and actually pull out a game on the road?

The two players who didn't get a chance to contribute after the first quarter were Miles and Brewer.  They didn't see a single minute after they were taken out in the first.  It's a good way to shake things up.

In the second half they played almost exclusively zone.  There was some criticism of Sloan in the past couple of games because he didn't go to a zone when the opponent's guards were driving at will.  They went to it in the second half and New Jersey couldn't make a shot to break it up.

And maybe the tipping point was Jerry' second T after Millsap got called for a travel in the post.  I don't know if that's what Jerry got t'd up for, but it was a bad call.  I didn't see anything that was close to a travel.  Whatever it was, the Jazz were down 67-70.  They would go on to out-score the Nets 36-22 and win 103-92.

So you can point to a number of factors why the Jazz came back, but to me, the biggest reason was that they looked like they were having fun again.  The past month or so it has looked like every little thing was a struggle and everyone has had frustration on their faces even when they won.  It was as if the old movie cliche of an overbearing coach got canned at halftime and Deron Williams stood up to give a rousing speech had happened.

Even when they were still down in the fourth and Deron had just turned it over after going up and getting stuck with the ball, he came running back down court smiling.  KK had a huge grin and everyone on the bench was into it.  When KK hit the three to put the Jazz up 4, they exploded.

This December seemed to be having the same feeling to it as last December.  Whether it was mainly Giricek or not, the chemistry seemed to improve greatly  after the Jazz traded for Korver.  The way they handled themselves changed.  They almost had instant swagger.  Is the whole Boozer thing causing that bad chemistry right now?  Can't be helping.

Could this be the turning point for the Jazz?  It certainly has a game-changer feel to it.  December 17th may be the date we remember at the end of the season that everyone looks back on.  Or it could be just a resting point to and even higher peak.