It's not lame, it's the 10 days of Christmas - Deron Williams signs

Share All sharing options for: It's not lame, it's the 10 days of Christmas - Deron Williams signs 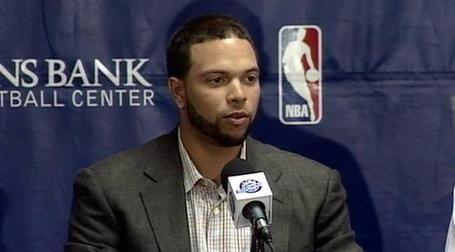 On the third day of Christmas the Utah Jazz gave to me... Deron Williams' contract.

That gust of wind on July 17th? That was the Jazz fan collective letting out a sigh of relief as Deron Williams had finally signed his contract extension with the Jazz.

While Jazz fans were looking for a "sell your soul to the devil for an eternity" type contract, they were content that they would have Deron for at least another 3 years after his current deal ran out.

The extension was pretty much a given, it was the length of the contract that was in doubt. Obviously the Jazz were trying to sign him for the max years, but Deron followed the trend amongst superstars that signed only a three-year deal with an option for a fourth. But as has been pointed out, when you're on Deron's level, you pretty much control your destiny contract-wise.

The three year deal allows him to opt out and sign for more when he has 7 years of service in the NBA. It makes sense for him and for everyone else doing it. For those that are mid-tier players, they'd go for a longer contract.

But don't fret. Deron has made it known that he loves the SLC and this team. The only way he leaves is if he feels the owners and management are doing enough to contend for a title.

So let's plan on re-doing this entry for INLITTDOC in three years after Deron has signed his next contract with the Jazz.