Morgan Jewlers is getting an absolute bargain for their sponsorship of the play of the game.  It's not just an end of the game highlight, any play throughout the game that is a possibility gets mentioned by Booner.  There were no less than 20 Morgan Jewlers plays.

But if there were a Morgan Jewler player of the game, there's no question it was Deron Williams.  To steal a comment from Shums last night,

46 minutes, 11-18, for 29 points to go along with 8 assists (which would have been more had the rest of the team not developed Harpitis.

It wasn't the 29 points as much as it was where and when he scored most of those.  He sandwiched a Paul Millsap layup at the end of the second quarter with two three pointers that helped cut a ten-point lead down to five going into the break.  He preceded that run by betting an old-fashioned three-point play on a spectacular drive and the finish and the foul.  If that had been the only one of the night, that alone would have been enough to show that Deron is back.  But Williams drove all night long and had several other spectacular finishes, breaking down Rodney Stuckey all night.

He saved his best for the end.  With the game tied at 96, the Jazz had the ball and the last shot.  Williams broke Stuckey again, getting into the lane, stopping on his left foot, turned around and nailed the go-ahead basket.  The only reason it wasn't a game-winning basket was because there was still 2+ seconds on the clock and Detroit had a clutch shooter of their own in Richard Hamilton.  He had a catch and shoot that went in with .4 seconds left.

In overtime, the Jazz were down two as Deron calmy knocked down a cross over dribble and step-back shot to tie the game.  The Jazz then survived a last-second three-point attempt by Stuckey go head into a second overtime.

In the second OT, the Jazz held on to a one-point lead late in the game after a Tayshaun Prince shot.  With about 45 seconds left in the game, Deron drove again and as everyone collapsed on him, he found Kyle Korver on the wing for a three point shot  that gave the Jazz a 116-112 lead.  Korver didn't have a good game, but he nailed his only three-pointer when it was needed most.  Deron stated,

"I was ecstatic when Kyle hit that three, because I didn't know if I had another overtime left," 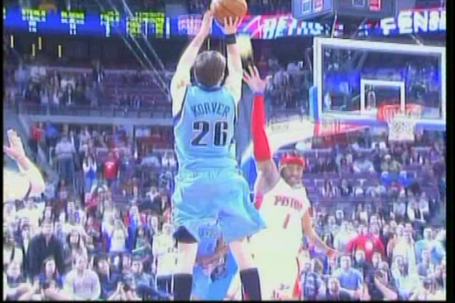 Free throws by Millsap and Kirilenko sealed the 120-114 win.

The Jazz have now won seven in a row over the Pistons and all of the games have been close for the most part.  Is there anyway that we can play them in the finals this year?

Okur loves to torture his old team.  He stated in his post-game interview that there's nothing special about playing against the Pistons.  But the past two years he's averaged 21 & 8 and 19 & 10 since he signed with the Jazz.  He had his \best game against them so far with 26 & 12.  Whatever Memo says it isn't is, let's hope that it continues when we play the Pistons again. 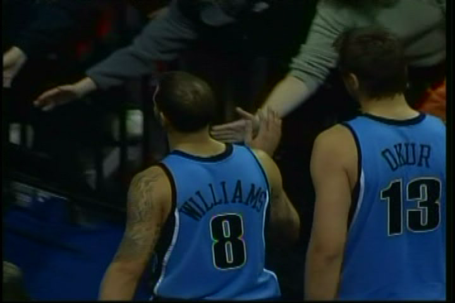 Millsap continues his assault on the glass and around  the rim.  He needed 2OT to get his 14th consecutive double-double.  His 24 & 13 for this game and 19 & 12 over those same 14 games shows why Millsap is this biggest bargain in the NBA.  How many other teams have a player on their bench that can come in and give you the same points and rebounds as their All-Star that's out with an injury?  There aren't.  Whatever the outcome of the offseason, the Jazz are in great shape.

Back to Deron.  If you see the same person every day, you're not likely to notice if they're put on 10 pounds over the last year.  But someone who hasn't seen them in that same time frame is likely to notice.  It's the same way with Deron's injury recovery.  He'd had solid play and has been spectacular at times.  The past few games though have shown the consistent spectacular play that we're all used to.  If you watch a game from when Deron first came back until now, his improvement has been pretty clear.  If you've watched the Jazz each game, these past few are the ones where you've noticed him step up his game.  Here's his points, assists, and TOs since he's been back, 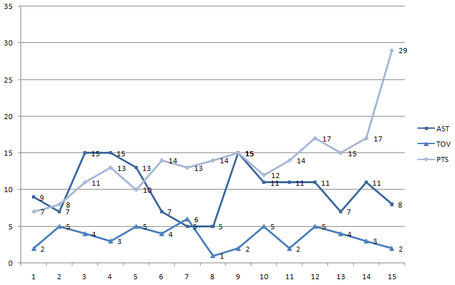 Good trends there.  He's taking over the games when needed and getting the ball to others.  You haven't seen him make too many poor decisions in this regard.  Last night was was one of those games where he took over offensively and would not let the Jazz lose.

And in what has to be seen as a Festivus Miracle, the Jazz committed only 21 personal fouls with no player having more than 4 fouls.  The Pistons on the other hand had 34 fouls with Hamilton, Stuckey, McDyess, and Wallace all fouling out.  The Jazz are still fouling less than their opponents on the year.  If that trend continues, it bodes well for their post-season aspirations.

Up next are the Bulls and Deron's chance to get revenge on Derrick Rose.  Not revenge in the injure him sense but perhaps the exclamation game that marks his comeback.  I think a dunk over someone, preferrably Rose, would be a good finish.