The flow of this game mirrored Deron's comeback from his injury.  It started out slow for the Jazz, shooting somewhere south of the Mendoza line.

But slowly they started turning the ball over less, passing better, and getting better looks (although it had to be a recent record for missed layups).  Though they let the 76ers tie the game in the second quarter, they pulled away for an 8-point lead at halftime and never looked backed.  By the time the fourth quarter had rolled around, the Jazz had pushed their lead to 20 for scrub garbage time.

Deron's comback from his injury has pretty much followed the same curve.  He had a couple setbacks early, had some strong games assists-wise, and over the past several games has come back to form.  Over the past 9 games he's shooting 49% including a more respectable 38% from three-point land.  During that same stretch he has averaged 19 & 9 as well as 1.6 steals and 3.3 boards a game.  His trends are looking good for the season (this is a running average after each game, not the number per game), 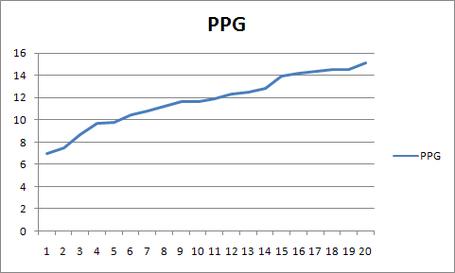 This is averaging out to right around where he has been. 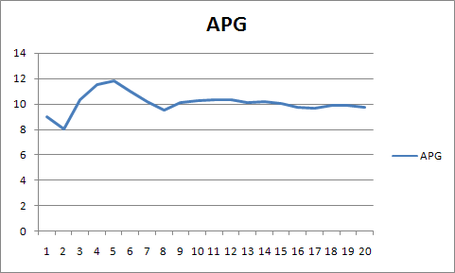 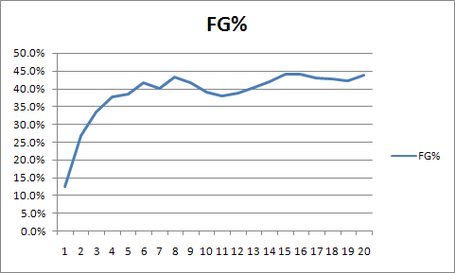 He didn't disappoint last night going for 27 & 6 on 11-18 shooting and hitting his first four three-point attempts.  We all know that his assists will be there, but if his offense is finally coming around, look out.  Still waiting on that dunk though.

Since Millsap's injury, AK has been a rebounding machine.  He's averaged 12 boards a game in his newest role.  His shooting hasn't been a thing of beauty, but he has always made up for it in defense and passing.

Memo's back, I mean Memo was back and picked up where he left off.  He threw down 19 points to go along with his 10 rebounds.  I've always said, as Memo goes, so do the Jazz.  We'll see how he does Friday in LA.

And finally, on his one year mark as a Jazz man, former 76er Kyle Korver had a solid game with 12 points and 5 assists.  He also got a pretty hard slap on the butt from Reggie Evans towards the end of the fourth.  For some reason, Evans got T'd up for it.  Kyle didn't even flinch when he got hit.  I don't know what to think about that.  It wasn't just a pat that athletes normally give.  It was a pretty hard swat.  I guess that's the norm in Philly because it didn't phase KK at all.  We'll see if the league overturns it.

Thank to Liberty Ballers for finding this

So the Jazz stand at 19-14 for the year.  They finished December 2007 at 17-16 after winning in Kyle's first game on December 31.  That started a 25-7 run that would vault the Jazz to the top of the NW Division.  The Jazz are just 1 1/2 games back now and are poised to go on a similar run.  Don't look for a trade though.  With Millsap coming back and eventually Boozer, the Jazz should be as strong as ever.  Williams is pretty much back to normal.  Gaining all of that back is almost like trading for some new players.  The Jazz are playing great now, but we all know that we need Millsap and Boozer to challenge for a title.