Share All sharing options for: It's not lame (okay, it is a little bit now), it's the 10 days of Christmas

Well, this happened last year. End of the year stories don't jive well with my procrastinating style. Throw in the holidays and it's even worse.

It's now a little lame now of course because these are past Christmas. Unless the 12 days of Christmas don't start until Christmas day, then I have plenty of time left. Anyway, here are the remaining "It's not lame, it's the 10 days of Christmas" lists in no particular order (except the last one).

On the 6th day of Christmas the Utah Jazz gave to me - Dreamy Kyle Korver.

This didn't happen in 2008, but it did come after the last INLITTDOC. The Jazz sent the disgruntled and dog house favorite Gordan Giricek to the Philadelphia 76ers for #26, Kyle Korver.

I recall stating (too late to look up the link on basketballjohn.com) that the birth rate might take an unprecedented spike in the September-October range due to Kyle's arrival. Not that Kyle would father those children himself, but that the lady Jazz fans would feel a little more amorous while watching games. We'll have to wait to get the statistics on that.

But on the Jazz side of things, the team instantly took off. They went 38-12 the rest of the season to claim the NW Division title. That run included a 10-game winning streak and a 19-game winning streak at home. Kyle not only spread the floor for the Jazz bigs to work on the inside, he gave up approximately 5 turnovers less a game because he didn't have the Giricek shuffle-step.

He was an instant fan-favorite. His first three at the ESA in his first game nearly blew the lid off. With his ongoing charity work, good looks, and timely shooting, he'll be accepted in Utah for a long time to come.

On the 7th day of Christmas, the Utah Jazz gave to me - CJ Miles matching

Despite having not played in the last two Rocky Mountain Revues, CJ finally got his big payday.

Miles had always shown flashes of his athleticism and basketball skills. He was always in Sloan's doghouse and would get benched for any error.

But apparently, the OKC Thunder thought enough of him to offer him a four-year deal worth $3.7MM per. So now the Jazz were finally forced to make a long-term decision on him.

This happened shortly after Greg Miller's appointment to CEO of the Miller family empire and while Larry H was still in the hospital.

In one of the first big decisions as CEO, Greg, with the input of KOC and others, elected to match OKC's offer.

First, Miles should have to tithe his salary to Greg from keeping him out of the misery that is OKC basketball (although I don't think CJ would have cared as long as he was getting paid).

Outside of Millsap, Miles may have been the biggest beneficiary of injuries this year. He was moved into the starting lineup with AK coming off the bench. It started out as an experiment with Deron sidelined and it stuck.

He's not without criticism though. Sloan still isn't afraid to bench him. He doesn't play much in the fourth quarter. And there's not a shot that he doesn't like.

LHM later revealed that had he not given up basic control of things, he would have let C.J. go. Had CJ played like he is now in a Thunder uniform, there could have been much anger from Jazz fans.

On the 8th day of LINK Christmas the Utah Jazz gave to me - New Year's Eve Party. 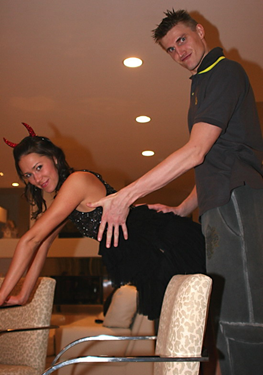 Enough said. Collins stated that things were pretty tame. I tend to believe him just because he was there. But please, please, please post more pictures from tonight's party. That's all I ask. Thanks Masha.

On the 9th day of Christmas the Utah Jazz gave to me - Deron Williams snubbed.

Brandon Roy and the Blazers had an amazing month of December. They won 13 straight (ended by the Jazz on New Year's Eve). The Jazz flat out sucked that month. I don't know when the coaches vote, but it can't be until after the starters are announced I would assume. That given, the
Jazz rose to the top of the NW conference in January and Deron Williams was the reason why. His assists shot up 3 per game from the previous three months (8.6-11.6). He single-handidly took over games and showed why he was a top-3 point guard in the league.

Brandon Roy's stats slipped a bit in January. But more importantly, his team slipped to a 8-6 record after going 13-2 the month before. The downward slide for Portland continued and they finished out of the playoffs.

It look like the RoyPod was the deciding factor in this. The Blazers sent out an IPod with Roy's highlights for the year. The Jazz marketing team better get going on something like this for 2009.

Deron got a small consolation prize by dominating the skills challenge in the All-Star game. He put up a record time and defeated Paul in the finals.

He also had one of the best games of the year against the Hornets after the teams were announced and he wasn't on it. In case you need some reminding,

This snub can't happen this year. I'll have something coming on this subject shortly.

On the 10th day of Christmas the Utah Jazz gave to me,SLCDunk.com

As most blogs do, writing about the Jazz started out as a hobby and somewhere to vent a bit about the Jazz. There were just a few Jazz blogs at the time and I thought there was room for at least one more.

So what started out with a few hits a day in March 2007 turned into a few more and it snowballed from there.

So I came across a coupld of SBNation sites and was looking for their Jazz blog. When they didn't have one, I emailed them about joining. It would give me some more traffic and I wouldn't have to worry about the hosting/tech side of things.

So since then, this little site has grown quite a bit and it's growing each day. Here are the stats from this year,

It's not as large as some of the big sites, but it's getting there. A championship run would do a lot to boost traffic so if any of the Jazz team are reading this, I would appreciate it if you could help out with this.

The biggest reason I wanted to move to SBN though was for the community tools that they have. With FanPosts and FanShots and the game threads, I don't think there are any sites that can match that. There are a bunch of new features coming shortly as well.

And why did I care about that? Because I wanted to build the biggest and best Jazz fan community out there. We have got great commenters, contributers and those that just lurk.

So thanks for posting/commenting/lurking and all of the insightful things that are written about here. It's because of this that this is the best Jazz fan community and it will get better.

(whew, just in under the gun)

Click here to read the rest of the INLITTDOC