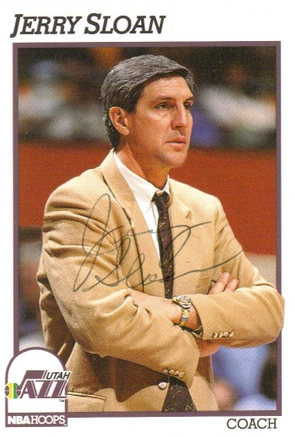 The only coach you've ever known. Well, there are probably those that remember Frank Layden. I do. But it doesn't really feel now like he was ever the coach of the Jazz. Sloan's 20 years have taken up most of my life and almost my entire recollection of following the Jazz. I guess it would be akin to having a full head of hair 20 years ago but you went bald overnight. You would never remember the full head of hair.

And I can't even imagine being a fan of another team where they've probably had at least 3-4 coaches in that same time frame.

Coaches seem to be a dime a dozen in the NBA. When one if fired, there's always another ready to take his place. While many would find 20 years in one job stagnant, in the NBA, it's pretty refreshing.

And when he's decided he's done (when he decides he's not as hard of a worker as one of his tractors), he'll hang them up. And just as sudden as Layden's retirement was, Sloan's could be the same.

A lot of people have called for a changing of the guard. His ways are too old, he doesn't handle younger players, he's out of touch... the list goes on and on. The fact is, he's one of the greatest coaches of all time. His old ways have stood the test of time. They work now like they did in 1988. He self-admittedly has been the beneficiary of having great players. But we've seen other teams with great players that haven't accomplished half of what the Jazz franchise has.

So while I'll still yell at Sloan every time Harp is in, we're lucky to have him. And when he decides to hang it up, and a new coach comes in, we'll see a lot of those that cried for his dismissal, wish that he was back on the sidelines again.

This wasn't meant to be a Sloan post, but that's sometimes how things turn out when you start typing. There's a lot of stuff out there on Sloan's 20th anniversary. So I'll just link to it instead of posting a bunch of links.

Sloan and the Jazz take on a Minnesota team that wasn't even around when Sloan took the helm. That makes me feel really old because I remember when the Wolves came into the league.

Kevin McHale takes over coaching duties for the Wolves after ousting Randy Whittman. He'll be able to see what it's like playing with the players that he's drafted and traded for. His best moves as a GM were the drafting of Kevin Garnett (yeah for Minny) and then trading him to the Celtics (yeah for Boston).

The Jazz sit at 13-9 which is exactly where they were after a loss to the Blazers last year. They lost their next two to go 13-11 to start off their horrific December. We need this one to be a little bit kinder. We don't want to have to go on a 17-3 (would be nice) streak just to catch back up to everyone. It doesn't look like Portland is going to be as likely to fade this year. So any streaks need to start now and there's no reason why they shouldn't.