Today is the official start of the 2008-09 season for the Utah Jazz.  It will kick off at noon MDT with Media Day.  Wish I could be there.  I'll get some videos up of interviews later tonight.  And why isn't this being broadcast on the web live?  Someone needs to get with it. 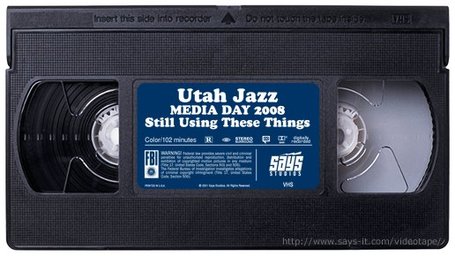 And do you realize that the first pre-season game is just about a week away on the 7th?  It's been a long summer, but when you look back, it's really flown.  The Jazz get things going against the same team that booted them from the playoffs.  While it's just a pre-season game, I'm interested to see how the Jazz come out against the Lakers and see how Bynum adds to their team.

Look for more regular posting now.  I'm going to be previewing the Jazz players countdown style.  Look for a couple of those a week leading up to the start of the regular season.  And my season preview will be coming but it's part of a larger rollout of previews.  You'll have previews from across the NBA from the very best bloggers out there.

Here are some pre-season notes and links,