Those were Memo's words last night after he hit a three-pointer to give the Jazz a 103-96 lead.  Of course you didn't hear him say that, but just like a slow-motion sequence in a movie, the camera caught a closeup of Memo pumping up the crowd.  You didn't need to be a lip-reader to figure it out.

And I'm dead serious when I said that the Jazz need to either bus a group of professional fans to away games or buy up the remaining tickets for away games and give them to anyone showing up at the door in Jazz garb for free.  I've never seen a team that relies so much on the home crowd.  That has to be the only logical explanation, right?  The disparity between their home play and road play blows me away.  Every team plays better at home, that's a given.  But most decent teams can play .500 ball on the road.  Here's a list of teams' road records.  And here are the best teams at home.  If we are just 11-10 on the road, which we should be considering losses to NY, OKC, Washington, and Charlotte, we'd be in first in the NW and the third seed.  I'll stand and scream the whole game if the Jazz are willing to fly me to each away game.

Getting back to the Minny game.  This could have been considered a gimmee win before, but the Wolves' 7-1 record in January makes it more significant.  They're going to be spoilers for sure.

The telling team stat of the night was 15.  That was the number of fouls the Jazz had.  Millsap only had 1 and that came late in the game.  That was more impressive than his 28 & 15.

My John Madden analysis tells me that when you get to the line more than your opponent (29-16), you're more likely to win the ball game.  That was the case last night.

I don't know what's happened to Deron's shot, but if someone finds it, please return it the ESA immediately.  I still attribute some to his injury but I think it's mainly because he's not able to finish on his drives.  So those jumper bring down his FG%.  In the four games before this game, he had been shooting 50% and averaging 26 & 9.5.  He's still shooting just 43% on the year and hasn't improved in January.  I don't know if he'll ever completely heal this season.  It may take an offseason of rest to get back all the way.

Speaking of ankles, AK's will start getting regular cortisone shots it seems.  Is it to the point where you just have to laugh at this now? Is there a Mr. Miyagi in the house?  It's too bad he's passed away.  And it's really going to suck if they remake the Karate Kid.

This was going to be a precap, but I'll save the preview for the game thread.  Just know we're only 1/2 back of Portland now and a win tonight would tie us with Houston. 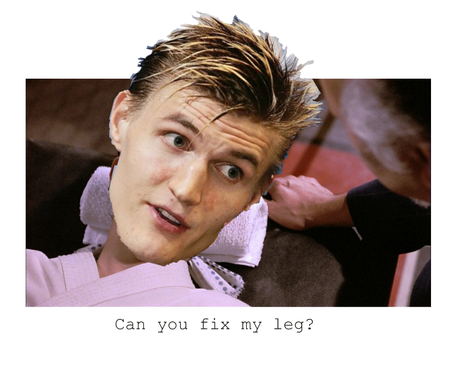