Does Fanzz know something we don't?

Share All sharing options for: Does Fanzz know something we don't? 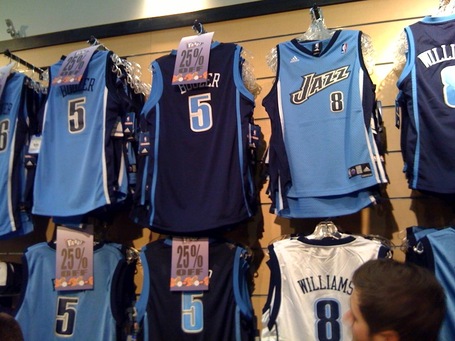 Thanks to Scott (don't know his username) for emailing this to me.  This was at the Fanzz store last night at the ESA.

You could come to a few conclusions based on this pic.  First would be that Fanzz must know something and Boozer is on his way out.

More than likely though is that the demand for Boozer jerseys is way down.  A mixture of fans souring on him, his uncertain status with the Jazz, , his insury, and simply not being seen really since he got hurt, have contributed to the surplus of #5s.

But it really speaks volumes that a marquee player such as Boozer had his jersey on sale mid-season.  I don't recall AK's jerseys being priced as such a couple of years back during that whole bru-ha-ha.

Get a good deal on a jersey though because I'm about 80% confident that he will be back next year.  I still think he backtracks and picks up his option.  Unless he comes back in February full-force and flat out dominates the last couple of months, he's going to want to prove himself.  Although, there were players such as Brand that got pretty good contracts desite injuries the year before.

Boozer will be trying to prove himself regardless, and that can only be good news for the Jazz.  We're going to need it.