This is arguably one of the biggest games of the year so far and not necessarily for the reason you might think.

Let's get this out of the way - Any time it's Williams v. Paul, it's big. Deron likes to say it's just another game, but at the same time he says that he likes going up against the best. So there's always that extra motivation for him. But the matchup isn't the main reason why this is a big game.

The Hornets just did the rest of the Western Conference a favor last night, knocking off LA in LA and closing the gap for everyone a bit. NOLA is 7-3 in their last 10 games and have won 5 of their last 6. So they're playing pretty well right now.

This game will be a good barometer whether the Jazz are serious contenders at this point in the season. We're facing a Western Conference power, at home, after they just knocked off the conference leader on their home court. So if the Jazz win tonight, it will show a few things,

Right now, the Jazz seem to be playing like the 2005-06 team. That team finished 41-41 on the year. The team was still trying to adapt to each other and that's kind of what we have now and that's how they've played.

That could be the biggest reason we need Carlos back. The 20+ & 10+ are obviously great, but the sense of normalcy could put everyone a little bit more at ease and we'd finally have the team we envisioned at the beginning of the season that was suppose to be close to leading the west at this point.

The big guns for NOLA are of course Chris Paul and David West. They're almost the Bizarro Deron & Carlos, except they're not the opposite. I don't know where I was going with that. Anyway, we'll have Deron v. Paul, Millsap v. West, Memo v. Chandler Bing, and AK against their defense. 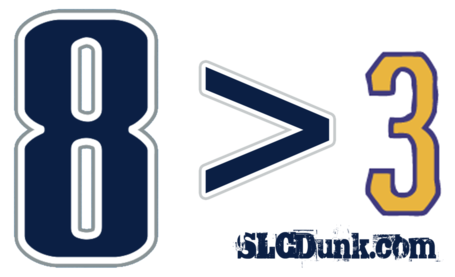