First off, it's easy to see why the Celtics are one of the favorites to win it all.  They have the perfect combination of talent, veterans, youth, etc.  They get a ton of benefit on a lot of the calls, but I think that's because they're trying to make things happen instead of waiting for things to come to them.

I thought we might be seeing a little something different from the team when they got down to the Celtics early in the first quarter but fought back and kept it close at 23-25 with about a minute left in the quarter.  From that point on though the Celtics slowly and methodically pulled away from the Jazz and never looked back.  There wasn't going to be a run by the Jazz to get back into the game.  The Celtics know how to handle a 20-point lead: 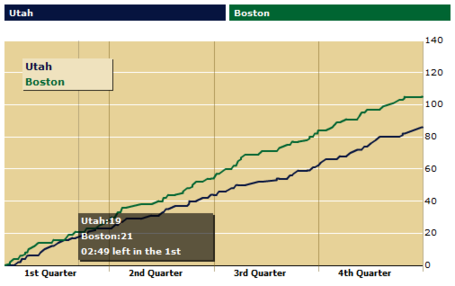 I tried to re-watch the game but had to fast forward through it.  What I did notice is this, not that it's any shocking revelation, Boozer is not only terrible on defense, he's clueless.

My Seinfeld brain was called back to this scene where Kramer had mistakenly started working for a business and knew nothing about how things worked.  After he turns in his work, he's called in by the boss and let go finally.  I think it parallels the current Boozer situation.  Let me adapt the script for you (and there aren't many changes),

What did you want to see me about, coach?

Carlos, I've.. been reviewing your defense.. Quite frankly, it stinks.

Well, I ah.. been havin' trouble at home and uh.. I mean, ah, you know, I'll work harder, nights, weekends, whatever it takes..

No, no, I don't think that's going to, do it, uh. These scouting reports you handed in. It's almost as if you have no basketball training at all..

I don't know what this is supposed to be!

Well, I'm sorry. There's just no way that we could keep you on.

I don't even really want to work here!

That's what makes this so easy.

You have plenty to pick from, but the examples of his bad D are so frequent, that jumping through the game at 10-minute intervals and re-watching for a few minutes gave me these two plays that exemplify his work.

1.  With 5:50 left in the second quarter, Millsap had just scored on a jumper and the Jazz were getting back on D.  Well, Rondo brought the ball down the court and passed to a wide-open Perkins for the dunk.  What happened?  Well, it looks like both Millsap and Boozer were at the top of the key guarding Garnett.  Guess who was suppose to be guarding Perkins?

2.  With a little over 8:20 left in the third, Ronnie B tried to hit AK with a pass that Andrei couldn't handle.  Going the other way the Celtics brought the ball down starting with Rondo passing to down low to Allen, Allen kicking it back out to Perkins at the elbow, Perkins flipping behind the back to KG, and KG then finding Rondo cutting for an easy layup.  Where was Deron?  Well, he had to go cover KG at the top of the key which let Rondo go by.  Who had KG?  Boozer.  What was Boozer doing?  Spinning around in circles in the key following the ball like the Cs were playing keep-away with him.

And while I'm at it, when Boozer is getting back in transition D, he has his back to the ball the entire time.  This allowed for a couple of times where KG could get the ball and go right by him.

And one more thing, for now, He could be the worst screen-setter ever.  He doesn't make any contact at all with the opponent.  Why is he so afraid of contact?  And on the flip side, when Deron or someone else is getting screened with his man (if he's remembered who his man is), he doesn't slow down their guy at all.  He steps out, puts out his arm, and that's it.  It's more like he directing the opposing guard where to go rather than try to slow him down.  Garnett on the other hand was great at slowing down Deron and Brewer because Booze couldn't set a pick.

Anyway, not that anyone else did that well last night either.  Nothing to hang your hat on at all.  There were some decent outings but the team effort sucked.

I'm tired of hearing that the Jazz losses have come against really good teams.  But there's losses to good teams and then there's losing games where you're up big, giving up 20-point leads to terrible teams, and not running the offense and not having any defensive pride.

Losing to the good teams is only good enough to get you a late lottery pick.

And I'm tired about writing about the front office not doing anything to turn the team around.