Share All sharing options for: While You Were Sleeping... 2 November 2009

Chris Paul's frustration in New Orleans could be getting ugly.  After their loss last night to the Celtics, some words were said,

BOSTON -- Rajon Rondo had nothing to say about New Orleans' Chris Paul in the locker room after the Celtics' win on Sunday. He and Paul both had said plenty out on the court.

The two point guards drew matching technical fouls in the first half and had to be restrained from each other following the final whistle.

Paul remained out on the court even after Rondo had been dragged back to the Celtics' locker room, and the incident quickly died down from there.

Kendrick Perkins just told me that Rondo said "Chris Paul has the stats that he has because he has the ball in his hands all game." Yikes.

Anyway, things could be going down hill there especially if they continue to lose.  They were blown out in their first game against the Spurs.  They had to rally to beat the Kings.  They played pretty well last night but the Cs put them away late.

Just from glancing at the box score, this one might have been a painful one to watch.  Kevin Durant and Brandon Roy combined for a blistering 8/38 from the field.  Neither team shot well at all.  I like this quote from ESPN's recap,

Tuckered out after a 42-point performance the previous night, Roy scored 16 and got aggressive late to finish out the Portland Trail Blazers' 83-74 win against the Oklahoma City Thunder on Sunday night.

My little kids get tuckered out as well.

This game on the other hand had pretty much no D.  Carmelo went for 42 points while OJ Mayo tried to keep pace  with 40 of his own.  The Nuggets pulled away in the 3rd and the Grizz never got closer than 6.

Does anyone play defense in the league any more?  Maybe that takes longer to come around when the season first starts.  Steve Nash had another 14 assists.  Stockton averaged that many in '91.  Absolutely crazy.  And Channing Frye is somehow the most lethal three-point shooter on the planet now.

Lots of third-quarter collapses tonight.  The Hawks were in this at the half before folding in the third.  Kobe was also apart of the 40-point club as he finished with 41.

I didn't want to wear him out.  Lot's of action last night.  So, KK2, what's the final say on last night's action? 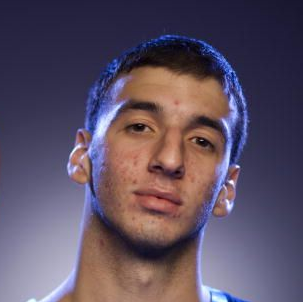 Not pleasing.  Too many wins in the WC last night.