This has nothing to do with basketball, but a huge congrats to Real Salt Lake for winning the MLS Cup.  What an amazing story to have had a disappointing season,  squeaking into the playoffs with about a half million things falling into place, and then proceeding to tear it up.

The icing on the cake is sticking it to the LA Galaxy which features David Beckham and Landon Donovan.  Anybody that can win a championship and do it against an LA team is fine by me.  And you know, having a championship in Utah is nice.

If you want to read more about it from someone that actually knows about soccer/football, here's RSL SoapBox.

As the comments stated, who knew that Greg Miller was so tall.  He's got to be about 6' 5" doesn't he? 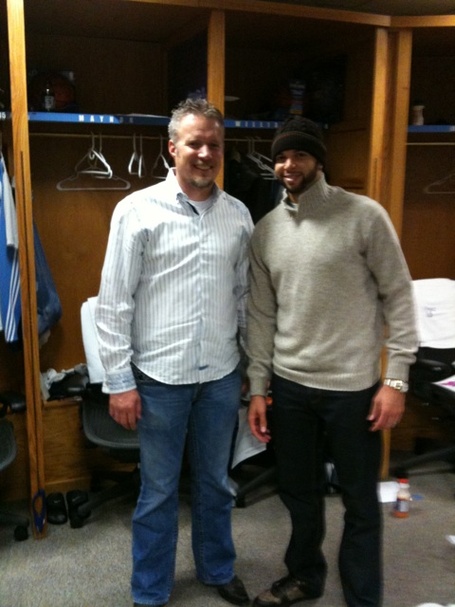 A couple of big games this week against division teams.  Not log overlook the Bulls, but we have OKC tomorrow night with Portland coming in on Saturday.  The Thunder are just a half game behind the Jazz right now and are sitting at .500.

The bigger game though will be against Portland on Saturday.  They're 8-2 over their last 10 games and are two games up on the Jazz.  It will be a good early measuring stick for both teams.

After having won just 1 game before last week, the Knicks caught fire and won two straight last week giving them 3 wins on the season.  Then, they almost beat the Celtics last night.  Thanks Boston.

They could easily lose their next 7 though as they have 5 of those on the road and have PHX and Orlando at home.

Their next game that they might win is against NJ, a team that still hasn't won a game and doesn't look like they will either for at least another couple weeks.

Maybe in addition to VoteDeron.com, I should have picked up VoteAK.com?  14.5 a game, 1.2 blocks, 3 assists and nearly 5 boards a game. His 3P% is almost at a career high.  Making the All-star team will be a big stretch but it could be argued that he's the MVP of the team so far.  He has saved the team on a number of occasions and has played just about every position so far.

If he continues to come off the bench, which he should, he could win 6th man of the year.