I know Fess will never be compared to Nowitski, but expand your shot a little. 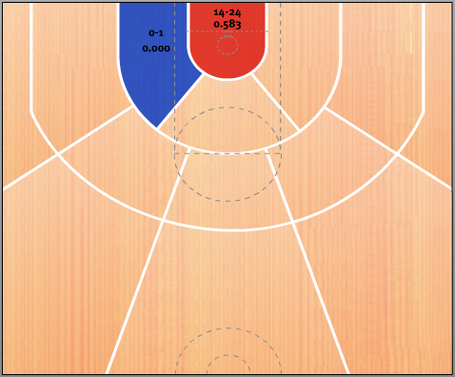 Here's the chart for the Jazz so far this season.  Nothing surprising from beyond the arc.  Those cold spots are usually the hardest to hit.  What is surprising is that I would assume your percentages should be going up the closer you get to the basket.

Yet in the three spots around the basket, the percentages are way down.  I don't know why that is for sure.  Is that because that's where floaters and other similar-type shots are taken from?  For the Jazz I figured it was because they get blocked so much.

I took a look at other teams and almost all of them are the same.  There's a few exceptions, but for the most part, everyone struggles in those zones.  Is that the least efficient shot in basketball? 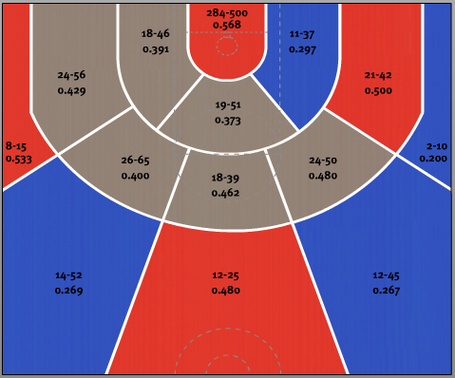 Kyle Korver and CJ could be returning as early as next week?  What do you think, will it be worth the wait?

Did we as fans overreact?  I guess that's part of our job.  I'm glad the panic has died down yet I think most fans believe that the Jazz aren't above going into another slide.

You've seen the Korver/Kutcher comparisons, but what about Korver/Carrot Top?  Have to say it's pretty close and scary.  KK has the perfect costume for next Halloween.

While you're enjoying the game tonight, I'll be withing spitting distance of the Jazz/Thunder - well, if I could spit from the Megaplex at the Gateway.  You'll be watching Deron and Durantula, I'll be watching sparkly vampires.

However, I will be at the Jazz/Bulls game on Thanksgiving night.  Pretty good trade-off.