Consistently inconsistent.  Honestly, I know that teams go cold sometimes and sometimes they hit everything that they throw up.  But there's some middle ground there normally.

The last two games have been mirror images of each other.  With the Lakers they hung in there for three quarters and of course crapped the bed in the fourth.

Tonight, they start out poorly and find themselves down 18 at home.  Then they turn it around and demolish the Magic starting with about 10 minutes to go in the third.

It was 60-52 at the half for Orlando.  The Jazz then went on to outscore the Magic 68-51.  What's going on?  Why the sudden changes the past couple games?

You cannot get any bearing for this team.

The Jazz hit their low with a little under 9 minutes to go in the second quarter when Ryan Andersen hit his 15th (okay, 4th) three-pointer of the young game.  That put the Jazz down 18 and began looking like the fifth and sixth quarters of the Lakers game.

At that point the Magic were shooting almost 60% from the field including 58% from the three point line.  From that point on though, the Jazz began to climb out of that hole.  And like a lot of their wins, it was a complete team effort.

The Jazz played great D the rest of the game holding the Magic to just 37.5% from the field.  Maybe that defense mantra has just taken a while to osmosisize into their system.  They didn't give up much in the paint and made the Orlando shooters launch threes and other long jumpers the rest of the night.  Take a look at the shot charts for each team: 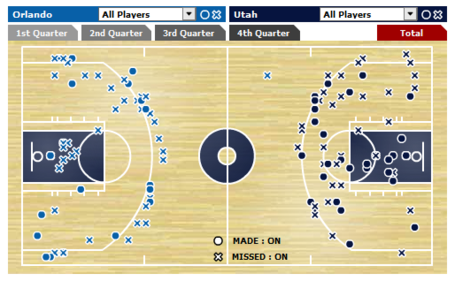 That's like me playing NBA2K.  It's either all threes or dunks/layups.  While this was a great team effort, let's take a look at the individual performances that led to this performance tonight.

This was the game we had all hoped to see from CJ after his pre-season.  He's taken a bit to get back into form but hopefully he's become or becoming the shooter that we need.  He may have just won his starting spot back.

He had 22 points on 9/17 shooting.  He hit back to back jumpers with just a little over a minute to go to essentially seal the game for the Jazz.

He didn't shoot too bad himself.  He had a quiet 14 points going 4/6 from the field.  I don't recall much more about his game.  I told you he was quiet.

His biggest contributions came on the defensive end against Howard.  Wait, did I just say that?  He frustrated Dwight pretty well after the first quarter.  Memo (and Boozer at times) held him to just 3/8 after that first quarter.  Howard only got one shot attempt in the fourth as the Magic were in full shooter mode launching everything from downtown.  The Jazz threw some great double-teams at Howard and showed him some looks that threw him off a bit.

Memo also did well and heeded my advice early by taking it to the hole and getting to the free throw line where he scored half of his 14 points.

He's struggled a bit for the last couple of games.  He was 0-5 last night from three.  Maybe he's feeling a little pressure from CJ?  He still had some good drives and played D.

Paul had a solid 30 minutes putting up 14 & 5.  His biggest moment of the night by far was his ferocious rejection of Dwight Howard.  Who said Millsap was too small?

Dare I say he had the hustle play of the night?  His dive for the ball late in the fourth is what allowed the Jazz to keep possession and give CJ the chance to nail his jumper.  He also had another play by the Magic basket where he saved the ball from going out of bounds and tipped it back in to Brewer (I think it was Brewer).

He also had two steals on Howard, one late in the third and one mid-way through the fourth that helped shift momentum.

And we haven't even mentioned his offense yet.  He finished with another 20 & 14 along with 4 assists.  Great game from Boozer.

In the Williams v. Williams matchup it was all Williams.  Deron that is.  This was his best game of the season and not just for the 32 & 15 & 8.  None of his shots nor passes were forced.  It certainly didn't look like he was out there trying to make the All-star team.  He took what he was given and found everyone else at the right time.

He had just 1 turnover in 42 minutes.  He's had more than that in 4.2 minutes in some previous games.  You couldn't have asked for much more from him.

The problem now is that we are going to expect this type of performance night in and night out, at home or on the road.  They dropped 120 points against one of the best defensive teams in the league.  The Magic had also won 6 straight and had won 8 straight road games.  They've always been a great road team the past several years.

So will we see some changes in the rotation against the Lakers?  Will we have Fess back to help combat the length of the Lakers?

I really wish I could say what kind of game we were going to see the Jazz play against LA.