Share All sharing options for: THANKS GOLDEN STATE! : Let the trade season begin 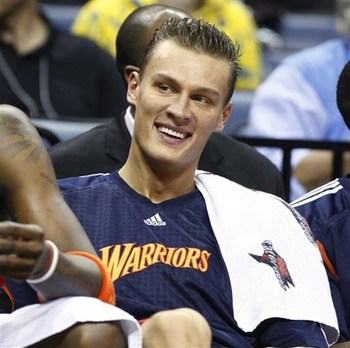 I say we trade for this guy.
December 15th, the first day that most offseason free agent signings can legally be traded, came and went without a single trade.  But even more important to a frenzied trade season was this report by yahoo sports Adrian Wojnarowski.  Other sources have confirmed Wojnarowski's report that no one on the Warriors' payroll is untouchable now and this surely will get GM's calling the Golden State constantly making offers for Warrior players, because no team has young talent that is currently being misused like the Warriors have.

I haven't been able to find this anywhere else, but ESPN insider says "Carlos Boozer, Caron Butler, Tyrus Thomas and David West were all mentioned by league executives as potential trade targets for the Warriors."

Seriously?  The Warriors would have interest in Carlos Boozer?  Well where do we sign?  There are some hiccups to making a deal with the Golden State Warriors, but it appears that right now is the right time to strike a deal, while the iron is hot and the GS front office is scrambling.  But take a look at Golden State's payroll via hoopshype.com.

The main problem is that the young players like Anthony Randolph and Anthony Morrow are in their rookie pay scales, so it is hard to match up with their circa million dollar contracts.  But the Warriors also have Andris Biedrins and his $9 million contract to throw into a deal.  It is well documented that Biedrins is expendable, since he has been rumored in several deals the last two offseasons.

The other problem is that the Warriors would want to bring back not only a good player, but a player who is likely to stick around after this season, so trading for a player who becomes a free agent next season is a very risky move for the Ws.

But you have to think that the Jazz could be players in this type of a deal if they wanted to be, and I emphasize the term, 'if they wanted to be."    I can't imagine that the Warriors wouldn't be interested to some degree in Carlos Boozer, Andrei Kirilenko or any one of our shooting guards, especially defensive-minded Ronnie Brewer.

So let your imaginations run wild.  Come up with your best trade offer.  I would trade Carlos Boozer for Anthony Randolph and Andris Biedrins in a heartbeat.  If that wasn't enough, how about Carlos Boozer and Ronnie Brewer for Biedrins, Randolph, and Speedy Claxton's expiring contract?  I am currently salivating.  If we traded with the Warriors we could get better now and for the future.  Leave your thoughts.