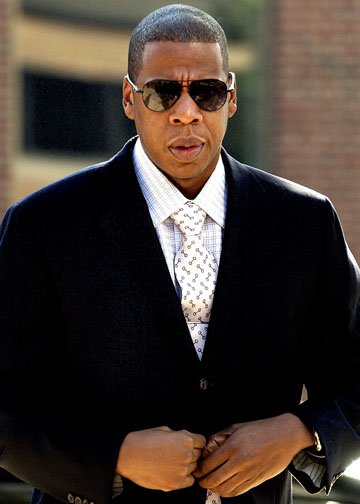 Jay Z is probably the most interesting thing about the Nets right now.

Well tonight begins the start of the Jazz's annual pre-Christmas road trip.  We talked about the last week's schedule being a "Hell Week" but historically this upcoming trip has been the real hell week.  The Jazz have had a winning record on this trip only once in the last 5 years and have been 8-16 on the trip over that time period.  As Carlos Boozer mentioned, this road trip will give the Jazz a chance to "get our swag back," and by swag, Boozer must mean their dignity after losing to Minny at home.

But the Jazz have no excuse for losing tonight.  The Nets are 2-23.  Let me repeat: TWO AND TWENTY THREE.  They have only beaten the Bobcats at home and the Bulls in Chicago.  And at the time the Bulls looked like the worst team in the NBA.  The Nets create some matchup problems for the Jazz.  But if they were really matchups that were hard to overcome, then the Nets would have won more than 2 games in 25 tries.  The truth is hard sometimes, but jinxing aside, if the Jazz lose, it will be due to a poor effort or gameplan.  More about the matchups:

Devin Harris-  He is one of the fastest point guards in the league and Deron Williams struggles defending speedy guards one on one.  The good news is that almost all point guards have a hard time defending Devin Harris.  So most other teams negate his speed by running effective double teams and showing hard on ball screens.  The bad news:  our bigs have  a really hard time showing effectively on screens AND getting back into low post position.  So don't be surprised if Devin Harris scores 25+ in this game.

Brook Lopez- Probably the best sophomore in the league as of right now.  Lopez has a very nice offensive game in the post and plays very good defense.  At 7 feet tall, Lopez is averaging 20 points, 10 rebounds and 2 blocks per game.  If you put this guy alongside a productive power forward, it could be one of the best frontcourts in the league.  Carlos Boozer would actually fit really nicely with Lopez.  But Lopez is going to give Boozer and Okur fits defensively and block some shots.

The Rest of the Nets- They aren't very good.  Courtney Lee and Chris Douglas-Roberts are the only other guys on the team who you could call starters in the league.  But Lee is shooting 37% from the field and 22% from the 3 point line this season.  Chris Douglas Roberts is having a career year, but he doesn't have a very versatile game.  At any time the Nets will have 2-3 players who don't know how to score in some combination of Trenton Hassell, Josh Boone, Jarvis Hayes, and Sean Williams.

So what do the Jazz do to win?  Three things:

1. Play with energy and effort-  Any team in the NBA can beat any team if one team doesn't play hard.  But even if both teams play hard, the better team will win almost every time.  I know it sounds stupid and simple, but it's true.

2. Run the offense- No jumpers unless they come from quick ball movement and penetration, please.  Attack the basket and keep the pressure on this Nets team to play defense.

3. Make the Rest of the Nets beat you-  If Harris goes off for 25 points, the Jazz can still win handily.  If Harris goes off for 25 and Lopez scores 20 and gets 14 boards, the Jazz can still win in difficult fashion.  But if Harris scores 25, Lopez gets 20-14, AND CDR or Lee hit 4 threes and get 15-20 points, it's curtains for the Jazz.  So just take one or two of those options away.  Hound Harris all night and make other guys beat you.  Or else double Lopez and get him frustrated.  But don't let them all get going, please.

I know I have jinxed the Jazz a lot this post, but at this point, I don't care about jinxing.  I think the Jazz's super crappy road record is one big jinx enough that the Jazz are going to have to overcome by beating bad teams on the road.  I didn't jinx them the last 5 years when they lost to New Jersey every season.  Let's start what will hopefully be a winning record on this road trip tonight.  See you at 7:30pm.