Share All sharing options for: GAME PREVIEW @ ATL- These aren't your papa's Hawks 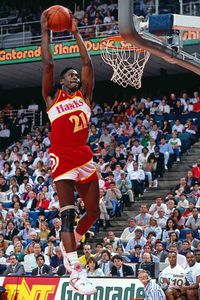 No offense to the human highlight, but this might be the best Hawks team in the last 30 years.

As good as Orlando and Miami have been at times this season, I am going to just say that tonight's game is the most loseable of the road trip.  The Atlanta Hawks are very good.  As recently as last year, the Hawks were very good with an asterisk, that if they realized their potential, they could be very, very good.  They have started realizing their potential.  If you haven't seen the Hawks play, you are missing out on a very exciting team.  They have athletes, they have shooters, they have guys who run the floor and they have the second best overall record and best home record in the Eastern Conference.  They are good.  Let's break down what you need to know about the Hawks:

The Hawks are the best team in the NBA in offensive efficiency- They don't shoot lights out and they don't have overpowering low post scorers, but they turn the ball over very rarely and they are a top 3 team in offensive rebounding.  So they score on more of their possessions than most teams.  And they have this guy named Joe Johnson.

Joe Johnson- Why the Suns let this guy go in the name of fiscal responsibility is beyond me.  They ended up giving out horrible contracts to guys like Marcus Banks in order to see Johnson walk away and he has been a borderline superstar out in Atlanta since he left.  I would put him in the tier of players right below the top tier.  He is with guys like Deron Williams, Amare Stoudemire, Kevin Martin, etc.  But like Deron Williams, Johnson is making a push to join the elite players.  Hey I am not saying Deron isn't a superstar, but he is just starting to prove his worth statistically.  You can't argue that.  But keeping Johnson in check is going to be a big key in slowing down the Hawks.

& Company- Josh Smith has always had the skills to be a breakout player in the league.  He is a longer, more athletic version of Andrei Kirilenko back in his best days and that is saying something.  But Smith has always held his team and his game back by getting stupid technicals, whining and having a horrible shot selection...until this year.  In fact, I believe most of the Hawks rise in the Eastern Conference should be attributed to his smarter game. He has vowed not to shoot as many three pointers and he has lived up to it.  The last three seasons he has averaged just over 1 3PA per game.  This season he has shot 3...total.  There are other factors.  The Hawks added Jamal Crawford in the offseason who provides a great scorer off the bench.  Crawford has put up 50 + points for three different teams and I believe he would set a record if he put up 50+ for the Hawks.  No better chance to do it than against the Jazz, right?  The rest of the lineup is filled with average to good players who are probably somewhat underrated and who know their role.  Joe Smith and Zaza Pachulia do the dirty work down low.  Al Horford is an underrated PF/C who goes unnoticed mostly due to his size.  But he is crafty and plays solid defense.  And Maurice Evans has scored 17 points a game for the last 4 games.  When they get that kind of production from role players, the Hawks are tough to beat.  They haven't just won 6 of 7, they have been killing opponents: 146-115 over Toronto.  118-83 over Chicago, 130-107 over NJ, you get the picture.

How the Jazz win:

1. Punish the Hawks downlow-  I am speaking of both sides of the ball, but mostly on offense.  The Hawks don't have shot blockers down low.  Josh Smith does most of his damage off the ball and hopefullyhe guards Memo on the perimeter.  Boozer and Millsap should be able to work on Pachulia and Horford and Joe Smith without getting blocked too often.  And on defense, the Jazz HAVE to keep the Hawks off the offensive rebounds.  This stat will be key.

2. Limit Turnovers- I know asking the Jazz to limit turnovers is like asking your 17 year old to not drive past the speed limit when they borrow your car.  But there are turnovers you can live with and ones you can't.  The Hawks don't run fast breaks often, but they can get out if you let Josh Smith block a shot back to halfcourt, or if you commit "the bad" turnovers.  Three in the key, charging, throwing the ball out of bounds= not good, but okay.  The rest of the turnovers are absolute no-nos tonight.

3. Keep the game close- If you do steps one and two, you will most likely get three.  But the Jazz can't come back on this Hawks team like they did three years ago.  This team feeds on leads and they feed of the crowd who feeds on leads.  Run the offense, don't turn it over, attack the rim and then steal one in the late stages of the game.  Even if the Jazz play great, this isn't going to be an easy win, like in NJ.  So play hard, buckle up (now you can't use it Boler), and let's get a W.