What do you even say to a fourth quarter like that?

Thanks to the Jazz broadcast for digging up the last time the Jazz scored this few points in a quarter.  The record was 5 back in 1981 against the Lakers in the fourth quarter.  We sucked so hard we couldn't even beat that record.

The worst quarter of Jazz "basketball" I have ever seen.

We've seen collapses by the Jazz before, but I don't think you could have seen this coming.  Before the start of the fourth, the Jazz had been playing well.  Low turnovers, they were playing decent D on the Lakers.  At the end of the third, the Jazz found themselves down only 2, 73-71.  Little did the Lakers know that they would only have to score 5 more points for the win.

I guess that poor shooting percentage was bound to catch up to them.  You can't keep shooting in the mid 30s and expect to win when the other team is shooting 50%.  The offensive boards hid that number for the Jazz.  They dried up as well though in the fourth.  But even then you didn't expect the Jazz to do what they did, or didn't do.

I thought the Sloan could have brought Deron and the rest back in a little bit earlier in the fourth.  You could feel the Lakers gaining momentum against the second team.  What's weird is that it was the second team that played so well in the second quarter and helped give the Jazz a lead.

This loss though lays squarely on the head of the Jazz though.  They went from layups and good shot choices to forcing everything, taking shots outside of the offense, and jumpers that had no business being attempted.  And when they did get decent looks, they couldn't get those to fall either.  Nice shot selection, 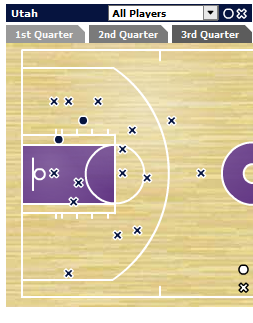 I said in the preview that the Jazz just don't have the swagger that teams like LA and Boston do.  For the first 2.5 quarters, they looked like they had it.  But panic sets in and everyone starts looking for their own shot.  Confidence then disappears and it's the ballgame.

Not much positive that you can take from this game.