Who can catch John Stockton?

Share All sharing options for: Who can catch John Stockton?

John Stockton's 15,806 assists could be considered on that list.

That number is even more impressive when you take into account that John Stockton wasn't even a full-time starter until his 4th season in the league.

There have been a couple of recent contenders in Jason Kidd and Steve Nash but as they get late in their years, they're running out of time.  We'll look to see if Chris Paul and Deron Williams have any shot at challenging Stockton's mark.  I couldn't think of anyone else right now that has a shot.

When he did become the starter, it was lights out.  In his first full season as a starter he averaged 13.8 assists a game and finished with a then-record 1,128 dimes.  That record would hold until he broke it himself in the 1989-90 season with 1,164 which gave him an average of 14.5 per game.  Seven of the top ten assist seasons in league history are owned by John Stockton. 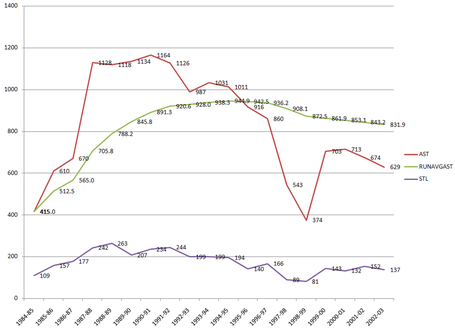 He led the league in assists for 9 straight years.  And even on the "downside" of his career, he still averaged 8+ assists a game.  His PER36 average never dipped below 9.5 a game.  All of this without even a sniff at an MVP.

So anyone looking to even get close to Stock's record has quite the challenge. 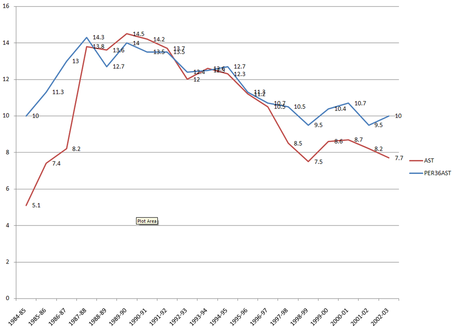 So what would it take to break his record?  First, no doubt, is longevity.  Not only did he play 19 seasons, he missed fewer games than Mark Price did free throws.

Second, you have to be in the right system.  If you're on a team that isolates and gives it up to the stars, you're not even going to get the attempts.

Third, you have to have the players around you that can finish.  Stockton had the second all-time leading scorer in Karl Malone.

And finally, you have to have the skill.  Most systems that are built for the assist will boost a player's numbers.  But the good/great ones can make those extra plays that get them a few more assists per game.

Let's take a look at the two that are close and two that could contend.

Jason Kidd
He just passed Oscar Robertson for fourth on the all-stime assist list.  His 9,913 assists put him in good position to pass Magic Johnson's 10,141 later this year.  And should he play next year, he'll likely pass Mark Jackson and his 10,334 dimes to put him second on the all-time list.

Should he continue his current pace, he'll finish the year between about 10,150 and 10,200 assists.  That leaves him 5,628 shy.  If you take his average assists over the past 7 seasons (700 per), he would have to play 8 more years at that pace to pass Stockton.  Given that this is his 15th year in the league, and he would be turning 43 at the end of those 8 years, I'm going to say that he comes up short.  It's not impossible, but not likely.

Steve Nash
Without running any numbers or projecting, I'm going to say he falls way short.  He sits at 7,207 as of this writing.  He could double his total and still be 1,392 from Stockton's total.  He's 34 and in the middle of his 13th season in the NBA.  He should finish this year with a little over 7,500 assists.  He's had his best assist years the past 5 in Phoenix.  He'll finish a bit lower this year but will still have averaged about 842 a year.  Even if we gave him  that number every year, he'd have to play almost 10 more seasons.  Given that his run and gun days of D'Antoni are behind him, this one has even less of a shot of happening.

Those two were the closest active players count-wise.  Given that no one else is even close, we have to look at the younger players now to see if any of those have a shot.  And really there's only one, maybe two that could challenge.

Before anyone claims homerism, you realize that he plays in the same system as Stockton did, right?  He's built like a tank so he can withstand the abuse (the Derrick "Freakin'" Rose incident notwithstanding) of the NBA.  Deron definitely has the skill to pull it off.  The only thing that I could see as the wild card here would be the players he's surrounded with.

Stockton had Malone for pretty much his entire career.  Deron has been almost equally as fortunate to have a finisher and go-to guy in Carlos Boozer.  His numbers haven't dropped though with Booze out.  Paul Millsap has been able to pick up the slack while others such as Ronnie Brewer, Mehmet Okur, and Andrei Kirilenko are the beneficiaries of a lot of backdoor cuts and layups.

Comparing the numbers is the hardest part because Stockton didn't have starters minutes his first few years in the league whereas Deron and Chris Paul have been thrust into that role.  I don't see either of them getting in the 13-14 assist per game that Stockton had, though both are capable.

There are a bunch of reasons why Deron wouldn't be able to do that.  First, Deron's looks to score more than Stockton.  John was always looking to set someone up first.  Second, he would always have to be in a system like where he's in now that focuses on the team game and passing.  Sloan could retire at any time and a new coach, even if it was Sloan's right-hand man Johnson, could put in a completely new system.  He's also not going to be guaranteed to have an All-Star player that can finish for him nor have the other necessary players.

But because Deron will likely have the longevity of Stockton in addition to being an All-Star player (though his snubbing gets louder and louder each game), he is definitely a contender to the throne.

Chris Paul
I give Paul the greatest chance at breaking Stockton's record.  The biggest reason is that last year Chris Paul accounted for 52% of the team's total assists.  That's the same percentage Stockton had during most of his run.  Deron on the other hand accounted for only 40% of Utah's total assists in 2007-08.  That's large in part because of the system he's in where others are responsible for passing and assists.  Paul's system is perfect for him.

Paul currently stands at 2,596 career assists.  Barring further injury and continuing at his current average of 10.9, he should end the season at roughly 2,930 assists.  That would leave him about 12,876 shy.  Given the same scenario as Williams, we'll assume he plays 15 more years after this and plays in 82 games each year.  He would have to average almost 860 assists per year or 10.5 a game.  Given his 925 that he had from 2007-08, it's definitely attainable.

The only thing I can see that could hinder Paul is longevity.  Injury always creeps into the discussion when you talk about CP3.  I don't think he'll have significant missed time, but each game he's out adds a little more the the average assists per game he would need to catch Stockton.

And of course it might still be too early to bring all of this up.  Both Williams and Paul are in just their fourth years in the league.  Anything can happen between now and the end of their careers.

As with all of the unbreakable records, you have to have the perfect storm of events for it to happen.

With Stockton you had a freak of nature that rarely missed a game.  He had that sixth sense and the ever-popular "court vision" to know where everyone was at on the floor.  His superhero ability also included knowing where everyone liked the ball and set people up where they would be the most successful.  It didn't hurt that he could slice the ball through a mass of legs and arms to its destination.  He had a HOF player to compliment him in addition to having a HOF coach with the perfect system for his entire career.

That's why we may never see Stockton's broken.

You have a perfect storm of the right system, a HOF player, a great team surrounding him, and the longevity of Stockton that could make his record unbreakable.