Probably nothing I could say to add to last night's win of the season.  If you didn't see it, I'm not going to be able to come close to recreating or describing what happened.

Every Jazz fan is used to getting our hopes up only to have them dashed on the slopes of Mount Olympus.   The team was certainly heading that way again.  They were up 101-92 after a nasty Ronnie Brewer dunk with about 6 minutes left.  But then do to a series of turnovers and horrible free throw shooting, the lead was lost with a Kobe three-point shot to give the Lakers a 105-104.

That would have done in the Jazz on a lot of nights.  But Kobe's copycat dance of Sam Cassell's cajone walk gave the Jazz the last bit of spark they needed to pull things out.

Paul Millsap kicked Kobe's right one in with a dunk and the foul to give the Jazz a two-point lead.  After  Kobe (insert your own madlib verb here) Kyle Korver of the ball and made a layup, Memo kicked him in the left one with a Money three-point shot to give the Jazz the lead for good.  Deron made it interesting after that by missing a couple of free throws, but the Lakers couldn't capitalize and went down 113-109. 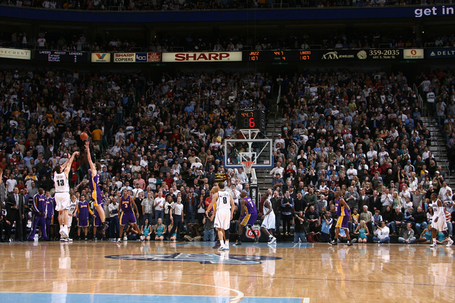 As long as your team wins, that's the kind of game you like.  Not much more you could ask for.  Here's what we got out of this game:

Let's see what everyone else is saying,

More stuff coming up despite the Jazz not having any representation at the All-Star game.