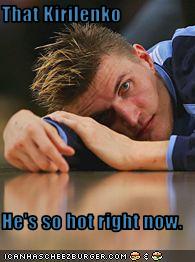 So are you ready to do this? The last 29 games of the season begin tonight. The Jazz will have the next 4 at home and will have 14 total at home to finish out the season.

The Jazz begin the unofficial start of the second half in good position. The Suns just fired Porter and don't seem to know what they're doing. The Hornets just traded Chandler to the OKC. Making the playoffs should be very realistic for the Jazz. And before Deron's injury, would you even have thought about not making the playoffs? That was a given. It seems crazy to even be talking about it.

So despite everything that's happened, the Jazz are primed to make a run that could get them home-court advantage. I hesitate even writing that because the past two years I've written (too lazy to look it up) that the Jazz have only been a couple games out of second or first only to have them go on a slide. I don't believe in jinxes but some of my recent writings have come back to bite me.

Kirilenko will be back tonight after having surgery just a little less than a month ago. He stated that he's only worried about the suture. Maybe he'll give us a Curt Schilling bloody sock moment.

Boozer is still out with no one giving a timetable for his return. Until he is on the court, don't worry about it. It will be like a surprise trade has happened.

Regardless, the Jazz should be able to take care of the Grizzlies tonight (though they are a feisty bunch).