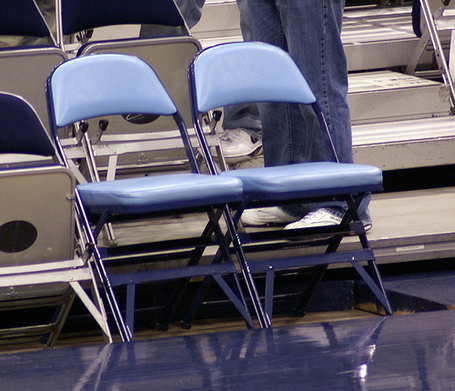 Larry H. Miller, husband, father, grandfather, a well-known entrepreneur, community advocate and humanitarian, died from complications due to type 2 diabetes today, at home, surrounded by his family. He was 64.

More news as it breaks.

Greg Miller is now officially the team owner (he was in charge of operations as the CEO already, but now it's for real). Probably nothing will change for the Jazz in the short-term, but it's still a major loss. I hate to overuse the whole "end of an era" thing, but in this case it's true.

Jerry O'Brien, The Tribune's late publisher, used to muse that the only place in Utah where the Mormon/non-Mormon divide didn't exist was the Delta Center. He was right, and the state has Larry Miller, a dedicated Latter-day Saint, to thank for that.

He was a regular guy. All you had to do to know that was to look at him. His uniform was a golf shirt, a pair of khakis and athletic shoes. He was just Larry. People liked that.

He also was an emotional guy. Tears came easily during press conferences about Karl Malone's latest pronouncement or some other tempest in the Jazz pot or, frankly, almost anything. And he made decisions from his gut. Or, as he put it, "feel."

What's relatively unknown about the man is the personal transformation he underwent over the past eight months, since his initial hospitalization after a heart attack. In our conversation, Larry hit that hard, emphasizing that as his body became weaker, his spiritual awareness became stronger.

"I've always considered myself a religious person," he said. "I've made mistakes, but I never set out to hurt anyone. I've been put now in situations where I am more sensitive to spiritual things, to Gail, to my kids, to my grandkids, to people in general. I hope that's one of the things that stays with me when I get better."

It will have to stay with him now in the Great Beyond.

Miller considered the Jazz his "gift to Utah." With a net worth of only $4 million, Miller convinced six lending institutions to loan him $8 million to buy half of a moribund basketball franchise that had lost $17 million in its 11-year history and, in its best year, had lost $1 million.

In 1986, it appeared the Jazz were about to leave town again, and Miller appeared unable to prevent it. He actually picked up a pen to sign a contract that would complete the sale of the team, which not only would have erased his original $8 million debt but would have given him a tidy $6 million profit — double his net worth at the time — for just a 14-month investment. After a long pause, with his pen hovering over the contract, he finally tossed it on the table and told co-owner Sam Battistone he couldn't do it. To buy Battistone's share, Miller passed up the fat profit and took on even more debt — to the tune of $14 million — for a total debt of $22 million.

Often, he spoke for me, the run-of-the-mill fan. All of us felt better when, after an injured Carlos Boozer made that idiotic comment about intending to opt out of his contract, Larry went on the radio to say it ranked among the top 10 most stupid things he’s heard.

We want to celebrate his life, an incredible American success story born of  humble beginnings. But as we reflect, all of us need time to mourn.   It won’t seem right, not seeing Larry sitting in his customary courtside seat. Not all change is good.

Every citizen in our state feels a little empty today. Larry was Utah and Utah was Larry. He inspired many and served countless. We all have been made better by his extraordinary life.

Mary Kaye and I wish to express our deepest love and sympathies to his wonderful wife, Gail, and their entire family and wish them a sense of deep condolences at this difficult time