Share All sharing options for: Deron v Paul - Because there's never enough fuel for this fire

Let me start out by saying that nothing has changed.  Chris Paul is absolutely fantastic.  He single-handedly  kept the Hornets in the game on Saturday.  He could not miss (until the fourth quarter :) ).

Here's the proverbial but...  You would think that with the MSM's fascination with digging up dead horses so that they can beat them, we would have Williams/Paul comparisons ad nauseum.  But since they won't cover it, then I have to bring this information to you.

Sure, we may have blue-colored glasses when it comes to comparing the two.  But is it totally out of line?  Are we comparing Rafael Araújo to Dwight Howard?

If you've been watching and following Deron Williams and the Jazz, you'll know that D-Will has been crazy the last two months, you know, the last two where he's actually been healthy after the Derrick "Freakin'" Rose incident?  You know, the one where he's had most of the team together instead of some ad hoc team and rotations?

And has anyone noticed that Paul's numbers have "slipped" over that same time period?  I say slipped, but it's hard to say slipped when they're still so high.  It's like if you're salary dropped from $1.5MM a year to $1.4MM.  Anyway, here are a couple of nifty graphs that will illustrate my point.

The first deals with assists.  After the Jazz/Hornets game, Deron's APG was 10.2 while Paul's dropped a bit to 10.7.  So a half an assist separates them and they're miles apart as everyone would have you believe?  The other line shows their running average of assists per game.  Pay attention to the last two months, 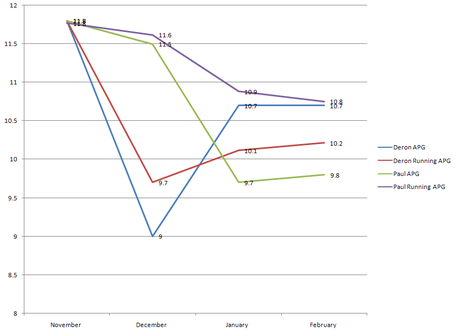 Paul's APG has dropped by almost 2 per game.  Still, he's almost at 10 per game.  Deron on the other hand has cruised along the last two months at 10.7 APG.

On to the points comparison, 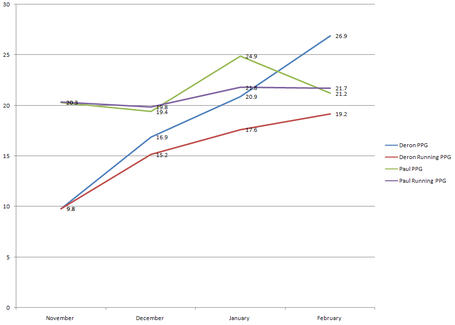 That scoring trend won't continue for Deron of course, especially since Boozer is coming back tonight and Deron won't be called upon to score as much as he has.  But you see what he had in him.  Had Paul had 5 straight games of 30+, you'd still be hearing about it now.  For the record, Paul has 6 games this season with 30+ while Deron has had 7.  You won't hear about that either.

So while I would love to put this whole debate to rest, as long as Deron is perceived to be less than Paul, it will go on.