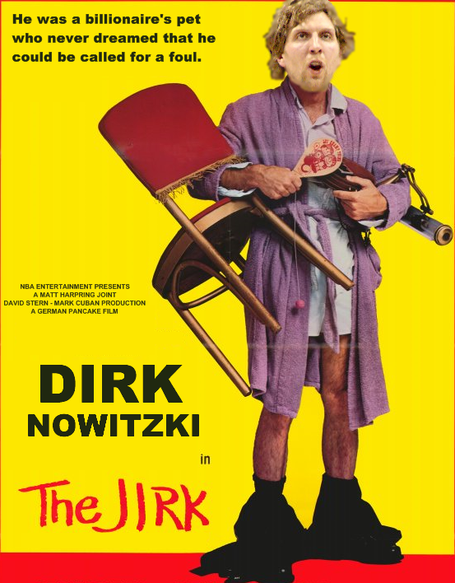 Has anyone put down any cash on whether Dirk gets the boot again tonight? He's got two in a row at the ESA after body slamming Kirilenko last season and delivering a closed fist to Harp's face last time.

I love how people see these things so differently. According the the Mavs Blog, the slam on AK was "inadvertent" and the whack on Harp was an "accidental fist bump."

An accidental fist bump is an awkward exchange between you and Barack Obama. And apparently Jirk was just trying to elbow Harp in the neck/shoulder area. That would have been better...

Deron will be back in action tonight but CJ will miss the game.

With AK out, Millsap will draw the assignment against Nowitzki. We should see a lot of double-teams and hopefully that comes from Harp.

The Mavs have been on a roll of sorts recently. They've won 4 straight and are 7-3 in their last ten.

And if you're not watching TNT, you're missing out. I wonder how they convinced Malone to come on.