Man, I don't know what it is, but those 25+ or those with kids will agree...  Once 10 p.m. hits, you're done.  So when the game starts at 8:30 p.m. and gets delayed 30 minutes because Boston and LA can't make a shot, not to mention that TNT has no contingency plan for OT like having a TNT2, I was amazed I made it through the whole thing.  The beat guys aren't happy about it either.

Anyway, I didn't get a recap in which is a huge disservice to the amazing game last night.  Not only did the Jazz blow out the Mavs, but Jirk sucked and wasn't a factor.  I still think we need Booze, and we definitely need AK, but play like last night gives me hope about the future of this team.  We can be a great team.  We just need to be a lot more consistent at it.

Of course it's a lot easier to do that when you have someone like Deron Williams playing for you.  Over the past 12 games, D-Will has averaged 25 & 11 while shooting 51% and 40% from downtown.  I will say that when the end of the season comes, Deron's All-Star snub this year will be even bigger than it was last year.  And uh, oh, someone is closing in on #3 in assists (click for bigger).  Crikey, what would people do if Paul wasn't the assist leader? 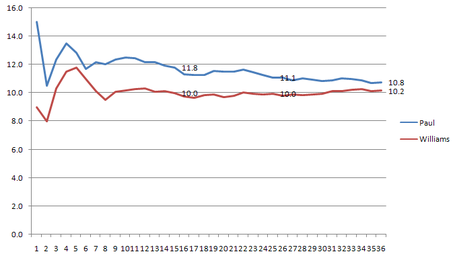 And finally, I don't believe in jinxes.  Even if there were, we'd be all jinxed out for the season anyway.  So it doesn't bother me to say this.  I'll echo Shums sentiments from last night's game thread.  When Boozer and Kirilenko come back, and it could be as early as the 17th (via UtesFan89), the Jazz should quickly climb back into a race for not just the playoffs, but a top spot in the seedings.

Maybe this whole injury thing has been a blessing in disguise.  A disguise to get Sloan to play the youngsters and to give an already deep bench some experience.

Regardless of what happens this summer with them, you have to salivate at least a little of a 1-2 punch of Boozer and Millsap, right?  Everyone knows what Millsap's done as a starter.  And now he gets to come in against the second team?  Same thing for AK.  He was dominating before getting hurt.  And now we'll have Price/Knight, Korver, Millsap, AK, Harp (yes, I put in Matt), Kouf, and Memo (he usually plays with the second unit).