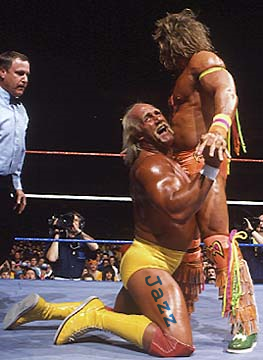 After a great third quarter and a good second half against the Kings, the Jazz reverted back to the Third Quarter Collapse that we've seen so many times this season.

The Jazz didn't shoot worth crap. Their jumpers weren't falling so they decided to switch it up a bit and took more jumpers.

We didn't have anyone that helped on the offensive tonight outside of Deron and Memo. C.J. Miles was the only other Jazzster to crack double-digits.

I don't have anything to back this up, so this might be completely wrong, but it seems as if the Jazz need at least three guys having good nights to win. Maybe that's how it is with all teams, but when you see that Deron has 31 and Memo has 21, you'd normally think you're in good shape. But as rxmike12 stated, everyone else "shot like ass."

Give credit to Golden State for shooting well an playing good D on the Jazz. Utah shold have dominated the inside but didn't get any of the backdoor cuts and easy shots from good passing that they normally get.

Plus the Warriors shot well above their normal FG & 3P percentages. When you play a team like the Warriors, you're going to get nights where they shoot lights out. And in the third quarter, they couldn't miss. Combine that with the Jazz taking long jumpers and it wasn't going to end well.

I don't know what personal vendetta Corey Maggette has against the Jazz, but he has always played well against us. We've tried to sign or trade for him several times and haven't been successful. Now we know why. We just want to sign him so we can Marbury him.

The Jazz will have a couple of days to stew on this and I'm sure will face some grueling practices from Sloan.

They can make all of the first-half season pain go away with a win over the Lakers on Wednesday before the break.

After the break, the Jazz could be getting back Kirilenko AND Boozer. How weird would that be? I've completely forgot what the whole team looks like. Getting back both of them is almost like making a blockbuster trade. Their return should provide a much needed boost both for team morale and for sheer basketballness.

Whatever your feelings on Boozer are, there's no doubt that his return is vital to this team returning to the playoffs and advancing.

If there's one thing that will make everyone forget Boozer's statements and his impending opt-out, it's winning. We saw the same thing when AK demanded a trade. Everyone was down on him. But the Jazz went out and won and everyone forgot. And now AK is one of the most important pieces of the Jazz.

We've weathered the season so far. But things are about to get better.