Before I get to the game, I want to say the first thing that popped into my mind when I watched the game is that there's a huge marketing fail going on here.

What better night to go retro and bust out the early green Jazz unis than St Patrick's Day? A lot of the team around the league bust out an alternate green uniform for the 17th. But we actually have had a green uni before.

How many D-Will throw-backs would sell? And Kyle Korver's birthday is on the 17th! How many chicks would buy a green #26?

So if anyone is listening, we need retro nights. 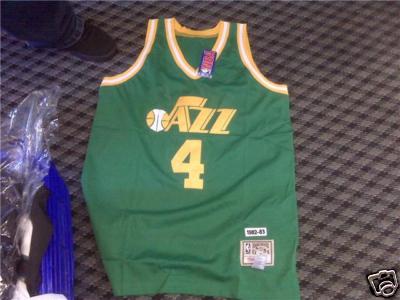 Is this the pre-season? I know we're playing the Wizards, but you still have to play the game. We should have been leading by 30 after 1.

The Wizards shot 5-24 in the first quarter! That barely cracks the Mendoza line. I love the alley-oops and other stuff as much as the next guy, but you have to take care of business.

#8,I'm talking to you. The other #8, you know, the number of turnovers you had in three quarters, doesn't look so good. Thank you very much for the half-court alley-oop to Miles, I literally jumped out of my seat. But this was the Wizz. I know you have a higher turnover rate than average, but I can live with it because of the high assist totals and breathtaking passes you make. But 8? You should have been slicing up the D all night and hitting everyone for layups and dunks.

I can't believe I'm complaining about a win.

Speaking of the pre-season, Memo decided it was time to try out a new left-handed hook shot. It looked pretty good. If you're going to go 5-15 from the field, might as well mix it up. If he can add a left-handed finish to his inside game, he's that much more dangerous. Just a weird time to be busting it out like that. Memo had it going early in the first quarter with three blocks as well. Crazy town.

I'm glad I didn't jinx Kyle Korver on his birthday. I honestly had no idea that it was and apparantly not too many others did either except for the moms and their daughters in attendance. They all had their custom KK birthday t-shirts on. See, those are the people that will buy a green #26. He continued his hotness by going to 15 on 6/9 shooting and 2/4 from downtown.

Ronnie B didn't have an ill effects from his "punishment" of coming off the bench. He still got 24 minutes and had 13 points, 5 assists, and 2 steals. Pretty much another day at the office for him.

We even had a Ronnie P siting for the first time in what seemed like 3 months. No Koufos though. Disappointing.

So now it's a couple of days off before we head back the OKC to face the scary Thunder. Once the 2010 free agency period is done, prepare for the onslaught of Durant getting out rumors. OKC's rise could make the NW the hardest division in basketball in a couple of years.