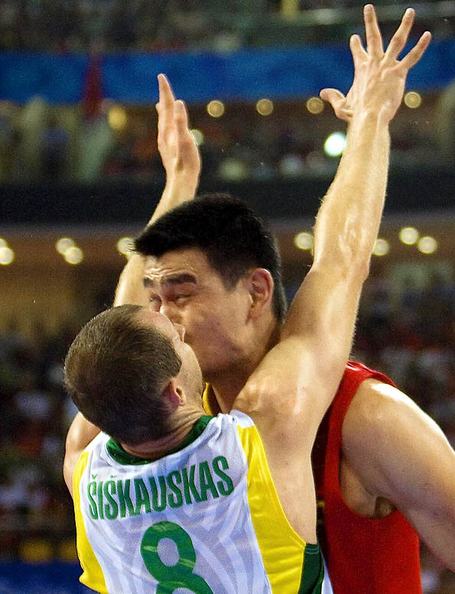 Yao Ming fell in love with the first human he saw after being hit in the face with the Brownies' "Dust of Broken Hearts."

The only thing we can hope for is not to get blown out by the Rockets.  They are clearly the best team in the NBA right now.  They can defend, they can make layups, and they can hit shots all over the court.  They have a guy who has been accused of being two people stacked on top of each other because he is so tall.  It is no wonder that Yao gets so winded when playing basketball: he has to carry someone on his shoulders the whole game.  They also have a guy who is, pound for pound, the toughest man on planet earth.  When the boogeyman goes to sleep every night, he checks his closet for Chuck Norris.  When Chuck Norris goes to sleep every night, he checks his closet for Ron Artest.  At power forward the Rockets have a man who must work part-time at Arbys, because he has grease from at least 2 and a half pounds of greasy burger in his hair at all times.  But his keen fashion sense pales in comparison to his monster low post game and free throw line jumpers.

Look, Jazz fans: we got lucky last time in Salt Lake City.  We just don't have as good of a team as the city of Houston has.  If it wasn't for the referees' horrendous calls and especially egregioius foul call on Yao Ming when Ronnie Brewer threw himself in front of Yao's path, then the Jazz would have lost that game by at least 5 points.

Here are the facts that will help decide this game, broken down position by position. Heaven help the Jazz.

Point Guards- Deron Williams vs. Rafer Brooks-  Deron Williams is a special, special player.  He is probably the best player in the NBA who hasn't made an all-star game and when his jumper is on, he is virtually unguardable.  Aaron Alston is a talented, talented point guard who spent some time in the AND 1 tour and playing fancy street ball in New York, before walking on to the University of Oregon and starring on their basketball team.  He can shoot, drive and shoot.  And sometimes pass...if he has picked up his dribble and there is still time on the shot clock.  And most importantly, if Rafer Brooks hadn't been injured for the first two games of the playoffs last year against the Jazz, the Rockets would have swept Utah.

Shooting Guards- Ronnie Brewer vs. Tracy McGrady Shane Battier- Ronnie Brewer, why don't you stop playing like a girl?  Man up, dude.  So glad that all you can do is stand in Yao's way and fall over like you've been hit by a 7'6", 310 pound man.  You are a nice young player who can get to and finish at the hoop, but please, just workout harder, or something.  Shane Battier went to Duke, which makes him awesome...and incredibly smart.  Babies get a new wrinkle on their brain when they learn something.  Battier learned so much as a baby and adolescent that his brain didn't have any more room for his wrinkles.  So his head started to wrinkle...a lot.

Edge: Rockets- in basketball and a knowledge bowl quiz

Small Forwards- CJ Miles vs. Ron Artest- CJ Miles weighs as much as one dumbell that Artest curls with one arm, 100 times, every morning.  Miles can shoot a bit, but let's just hope that Artest doesn't send him to the hospital.  Enough has already been said about Ron Artest.  He is a man among men.  And sometimes he is an NBA player among the NBA fan crowd.  And sometimes he punches people of that crowd...in the face.

Edge: Rockets in basketball and an MMA match, but Jazz in a game of horse or 3 point shooting contest.

Power Forwards- Carlos Boozer.  Rhymes with "Loser."  And  this guy hates him, so that must be saying something.  But he is almost always good for a quadruple double of points, rebounds, turnovers + missed defensive assignments, and times yelling "and-1, when the shot doesn't even go in."  That's an accomplishment.  Luis Scola. Rhymes with Pepsi-Cola.  I love Pepsi-Cola.  It's strong, consistent, delicious and dependable...and versatile.  It goes with popcorn, a burger, or ice cream.  It's a lot like Luis Scola.  He is one tough customer.  He doesn't flop, but just mans up and plays tough guy defense.

Centers- Mehmet Okur- you can look at Okur one of two ways: he is either a versatile player who can score down low or outside hitting sweet jumpers, or he is a pansy who is too afraid to play down low with the big boys and where God intended for 7 footers to play.  I'll take the latter.  If he did play downlow, he would get broken in two.  And if he did play low, Yao wouldn't be blowing Okur away in the rebound department. Yao Ming.  The best center in the game...period.

Bottom line prediction: The Jazz are composed of grabbers and floppers and players that will do whatever it takes to get a competitive advantage.  The only defense they know how to play is "pretend to get hit and fall down" defense.  If you like cheaters and players who don't respect the game, then root for Utah.  If you like championship-type basketball and tough play, without flopping or help from the refs in the 4th quarter, then root for the Rockets.  Bottom line: if the refs are up to their old homecourt advantage tricks, then the Jazz might sneak this game away from Houston.  But any other scenario has the Rockets victorious and the Jazz as the dirtiest, suckiest franchise in the league, who have never won a championship and got lucky the last two years in the playoffs.

How sucky and crappy are the Jazz?