The opening question at his media availability wasn't really a question. It was more a statement. When a reporter said, "Big game tonight," Sloan just looked at him.

"What?" the Jazz coach said.

With that, Sloan smiled and said, "Would you say that a little louder, so my players can hear it?"

So how do the Jazz start this game?  That will go a long ways in determining how this ends.  Our last game in Denver had the Jazz getting jumped on early and never recovering.  We were without Boozer of course, but they were sans Melo.

The first game of the season saw the Jazz hold on to beat the Nuggets .   We were without Deron but they still had Iverson.  Chauncey Billups won't be in any discussions for MVP, but he should get MVC, most valuable changer.

We didn't get a large enough sample size of Iverson with the Nuggets this year, but we know what he has done previously with the team.  He was an All-Star and put up good numbers, but he and Carmelo simply did not work playing together.

Had the Jazz not had the injuries they did, I think we'd be leading Denver by a couple of games still.  But as it stands, we're 1 ½ back and gaining: 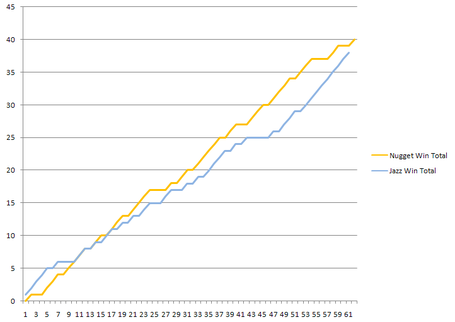 If you're talking in terms of reciprocating, long-standing rivalries that the Jazz have, the Nuggets are at the top.  I don't think it's ever died down.  We've been in the same division forever with them.  That's like having to share your bedroom with your little brother for 30+ years.  Of course, if you're still sharing a bedroom with your brother at that point, a rivalry is the least of your problems.

But the Jazz are definitely the older brother in this sense as we've owned the Nuggets for the past 20+ years.  Going back the last 100 meeting, the Jazz are 70-30 against our little bros across the Rockies.  Here are some average stats:

These games are rarely low-scoring affairs.  And just like brothers, we like to beat the hell out of each other.  The league average for fouls per game is around 20-22 (roughly).  The average PF for the rivalry is 26 for each team.  There are a ton of free throws, though the Jazz have a huge edge.

So what are we going to see tonight?  First, everyone has their full team.  We'll get the best idea on how these teams match up.  When we play in Denver again next month, we'll get to see how a potential playoff series might go.

That big brother/little brother rivalry never goes away, so this game will be another knock-down, physical, and sometimes whining fight.  The refs are going to be like the parents in this situation, except they have three to cover the match.

Denver will come out fighting with something to prove, just like little brothers.  While the Jazz can come back from slow starts at home like they did against Houston, this Denver team has the firepower to keep Utah at bay.  The Jazz need to come out with the big brother-like confidence and crush any confidence Denver might build.

These past two games are the beginning of a nasty end to the season for the Jazz.  But I guarantee that the next month and a half of basketball will be some of the best you've ever seen (or at least remember).