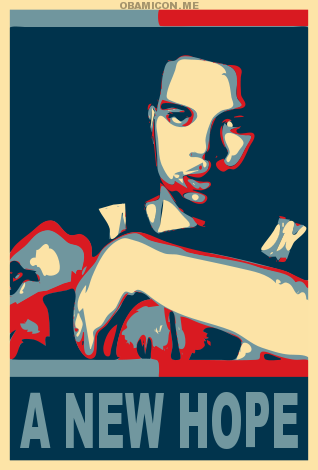 By constitutional ruling of Canada, you can find the French version of this post here.

Flat out, we lose this game last year.  Once the Raptors took the 8-point lead early in the fourth, that's when we would have crumbled.  Don't discount this win because it was against Toronto.  We would have lost against any team in this situation last year.  So to get this win gives me a little hope that the Jazz have finally found a way to win on the road.  Granted, it came against a sub-.500 team again, but we simply didn't win this type of game.

In the game thread, I wrote to stick a fork in us because we're done.  That was after the Jazz had given up 39 points in the third.

Just around noon MDT the Jazz woke up though.  It just so happened that that awakening coincided with Deron Williams' return.  Funny how that happens.

Following a Kapono jumper, the Jazz went on a 16-4 run to take a take a 97-93 lead.  That run got started on a diving hustle play by Deron who made a pass from the ground to AK for the AND-1.  After that, he had two driving plays, one the resulted in a layup and the other a dunk.

Andrei Kirilenko provided the other hustle the Jazz needed including a one man fast break after a jump  ball on Toronto's end and running 3/4 of the court for the dunk.

While free throw shooting was shaky down the stretch for Williams and AK, they made enough plays to compensate for it.

In a huge turnaround in the fourth, the Jazz decided they could play some D.  After giving up 39 points in the third, they clamped down on the Raptors and held them to almost just a third of their third quarter score with 14.  A primary reason for that was that Toronto took a lot of jumpers and couldn't convert: 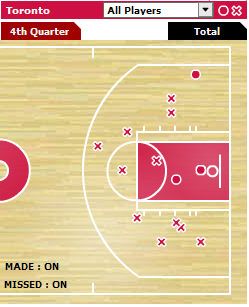 Toronto kept in the game mainly on the back of Chris Bosh who had 30 & 10.  It looked like he was going to continue to dominate in the fourth, but no one expected the Korver inquisition.  In addition to his 20 points, Korver had to huge plays when he went to double Bosh.  The first came as a block and on the second possession he stripped...  the ball from Bosh.  Both came with under four minutes in the game and the Jazz clinging to a two-point lead.  Probably the defensive plays of the game.

Deron finished with another 25 points and only 9 assists, breaking his streak of double-digit assist games.  Yeah, that's terrible.  But he did have just the one turnover.

Besides the aforementioned 20 points from Korver, three other guys neared the 20 mark.  Millsap had 18 & 11 in place of Booze who was out with an ankle.  Okur didn't make any threes, but he still finished 9/17 for 19 & 11.  And Kirilenko, 2nd in the MVP standings behind Deron, scored 18.  Take a look at the +/- for everyone.  Anything pop out?  Sloan picked the right 5 to play the majority of the minutes and to finish out the game.

And for the moment, we're in fourth (until Houston finished their game).

Video coming in a bit