Credit the Jazz for not getting blow out after getting down by 15 with 7:09 left in the second quarter.  Things sure seemed like they were heading that way after San Antonio came out of the gates on fire and the Jazz shooting in the mid 30s.

Roger Mason started out the game with a missed three-pointer.  Then the Spurs went on to hit their next 9 shots.  The only thing that kept the game even reasonble was some steals by the Jazz and other turnovers by the Spurs.

The final shot of those 9 in a row came from a Bruce Bowen three-pointer that put the Spurs up 8.  With the majority of the second teams in, the Jazz were able to close the gap some by playing some good D including a block on Tim Duncan by Memo.  Bad leg or not, it's always enjoyable to see Tim getting stuffed.

As the Spurs built up their lead in the second quarter, it sure had the feel of becoming yet another embarassing game.  The Jazz were able to put together a 9-1 run to cut it to 7 and it stayed pretty close to that to the break. 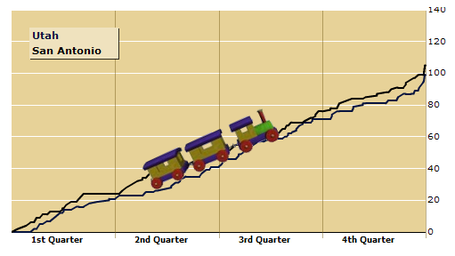 Here's where the Spurs earned this win.  They held off  the Jazz every time they made a run.  We had plenty of opportunities to take the lead in the third and couldn't make it happen.  It was our own fault on the offensive end.  We got the shots we wanted but couldn't convert them when we needed to.

I thought we played great on D in  the third quarter, the Spurs just hit their shots and won the game.  While Tony Parker and his 31 points were on the bench, Roger Mason, (you know, the guy who missed those threes to start the game) hit two threes to start the fourth just after Memo had hit a shot to cut the lead to two, 76-78.  The first came after Deron had fell down after getting picked.  Mason was at least three feet behind the arc and drained it.  The second came after he dribbled around for about 5 minutes and then just jacked one up.  Those back to back three pointers essentially became the difference to end the game.

The rest of San Antonio's night was just like that.  I counted no less than three shots that clanged off the front of the iron for them, went straight up in the air, and came back down and went in.  Parker was driving and flipping the ball in the general vicinity of the basket and getting it to go in.  Who knows, a few of those rim and maybe it's a different ballgame.

So while talk of streak now continues, somehow the place doesn't scare me as much.  I thought we had a good chance to win the game while watching.  Had the Jazz not come into this game having had a total meltdown in Dallas, we may have just chalked this game up to being a tough loss.

But the unfortunate reality is right now we're in the 8th spot and even if we win out, we need some help from other teams to jump past the Mavs and Hornets.  That's bad news because we don't get help when we need it.