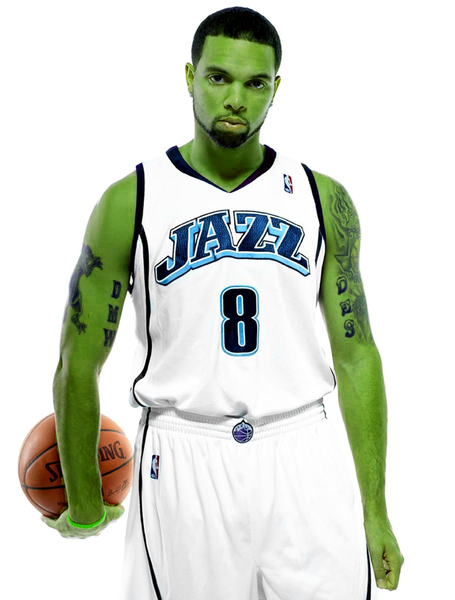 I don't know why, but I'm kind of peaceful about this game.  Once again, I have not logical reason why I shouldn't be.  Maybe there is a bit of logic:

Over the past three seasons the Jazz are a respectable 3-2 on the road against Denver.  Win or lose, they're all great games.

Keys to the game?  I should just create a widget that I paste into each road game preview.  The Jazz have to get out to a good start.  It doesn't have to even be a lead.  If they're within a basket or two, I would consider that a success.

I haven't heard any late-breaking announcements, but it could be that CJ has seen the last of his starting position.  I know Sloan likes to keep a consistent rotation, but the whole reason CJ was starting in the first place was because of the injuries.  In that case, it made sense to start him and bring AK off the bench as a sixth man to guide the second team.  But AK hasn't been the 6th man in a while, instead KK and Millsap have gotten the call.  So should we see AK inserted back into the starting lineup?  I think so.  It's a bit of a shakeup which the Jazz could use right now.  But it's not so big as to cause major ripples.

With the uncertainty of the off-season, it may be the time to go for broke and play the veterans.  I imagine putting AK back into the starting lineup would stroke his ego as well and that's been a good thing for the Jazz.

In addition, the Jazz seem to have a great deal of confidence when they play the Nuggets whether at home or on the road.  Maybe the good vibes force field that the Jazz fans create for them still has a bit of an effect on them since they're still close to the ESA in relation to other away games.

One last thing I would like to see that I didn't comment on about the Blazer game.  The Jazz don't seem to have a mean streak in them.  After Pryz chased down Carlos, Boozer talked back to him but he took it for the most part.  I wished we could have seen some emotion coming from him and retaliate, not physically, but show some passion.  Maybe there's too much going on right now for him.  I would have also liked to have seen his teammates come to his defense.  You don't want anything to get out of hand, and Deron did come and separate them, but it doesn't seem like anyone has anyone else's back on the court.  I could be completely off on this and maybe there's some unwritten rule that you don't get involved in anyone else's business.  But this whole thing has reminded me of December 2007.

And finally, an explanation for the the green Deron.  It's green night in Denver where they'll be wearing green unis because the NBA has this whole green thing going on.  Well, this is the green that I want to see from the Jazz, The Incredible Hulk green.