Sorry you couldn't go out on better terms Hot Rod.

It's an end of an era in a lot of ways.  This last year we've lost Larry H. Miller.  This last week we've learned of Hot Rod's retirement.  And who knows what the roster will look like next season.  Throw in one morning while Jerry is plowing a field and decides, like Hot Rod did, what am I doing?

Here are a list of players that could leave.  Most of them will probably be back I assume:

That leaves only 6 players returning under contract:

The season ended a long ways away from where it was suppose to end.  A lot of the other WC teams were supposedly going to drop off a bit and the Jazz were on the rise.  They were suppose to challenge for the 1 or 2 seed - and through the end of February, they were in a position to be #2.

You can guess as to what was the cause of the swoon and you'd probably be partially right.  You can't really pin the blame on any one thing/person.  It was a culmination of events that never got nipped in the bud.  As a result, things were allowed to nosedive and not even Ted Striker could have pulled us out of that free-fall.

But it's not really a time to dwell on that, because as of last night, the Jazz are officially in look-forward mode.

Before we get going with that though, there are few points to the game that I wanted to cover.

Let's talk about that amazing run.

2:01 left in the third.  Jazz down 80-58.  They call a timeout and essentially it looks like Sloan is throwing in the towel.

But Ronnie Price, Paul Millsap, and Kyle Korver come together and form the upper body of Voltron. At one point, Millsap goes on an 11-0 run by himself.  The Lakers take a timeout when the Jazz cut it to 11.

The timeout does little to stop the attack though.  A Ronnie Price follow up dunk and a Kyle Korver three-pointer cut the lead to 6, 95-89.  After an LA missed three, Memo had the rebound and the Jazz brought it up court, but Sloan called for a timeout!  I didn't hear anyone ask him why.  The Jazz had the Lakers on their heels and by taking that timeout broke the momentum that we had.  I can see needing to bring Deron back into the game at that point, but don't you wait for the next dead ball?  It gave the Lakers time to regroup.

I don't think Jerry believe in momentum because he doesn't take timeouts to stop it when the other team is gaining and he takes a timeout when it's clearly on our side.

There was still 3:20 remaining!  Plenty of time.  Instead, the Lakers put it together after a couple of missed layups by the Jazz and pretty much finish it off on an Odom AND-1.

I haven't seen that much heart and hustle in a long time.  Ronnie Price was inspiring with his play and chippiness.  Jerry Sloan said:

He shows you probably the mistakes that I made

Here's some of that hustle: 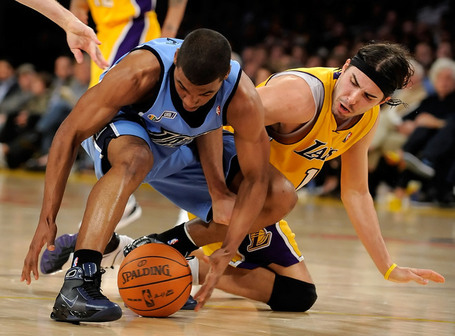 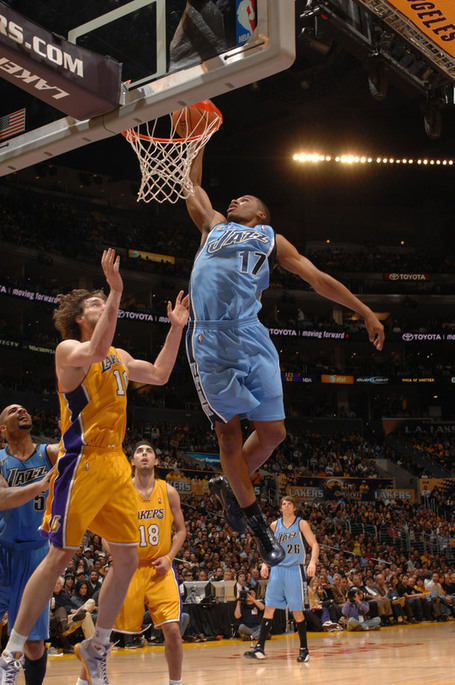 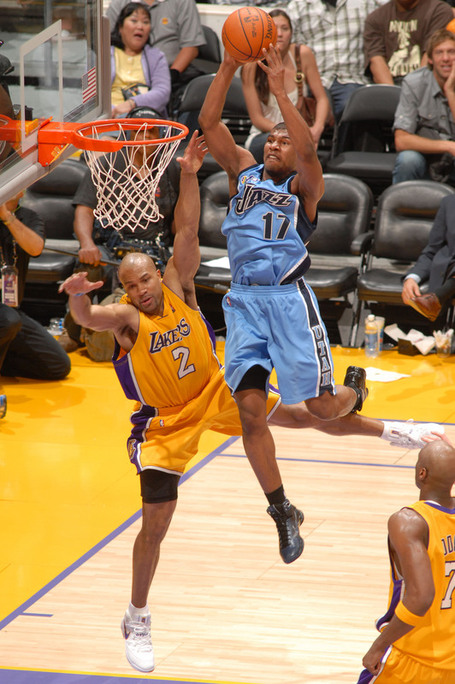 That dunk attempt came after Kobe and Fisher had been jawing at Price.  Price got hit up with a T after taunting Fisher.  This guy better be back for next year.

Jerry Sloan also finished off the season in fine form by getting two Ts and getting tossed.  I love that the networks show slow-mo replays of Sloan cussing out the officials.  In case you didn't hear/see it the first time, here's Jerry telling the ref to F Off in slow mo and closeup.  Classic.  What would have happened all of these years without Phil Johnson.  Does he practice that on off days?  He just has Corbin sprint for a player and Phil steps in to hold him back?

The season has come to an end and now we get to look forward to re-tooling, re-grouping, and coming out of this season stronger.

And the first person to get hurt is on my list.  There better be long days of conditioning this summer.

And to Hots, you'll get your own post.  But you're the only play-by-play guy that I and the rest of Jazz fans have ever known.  You will be missed.